Posted on November 3, 2016 by waywardwine

This Thirsty Thursday, with Fall in full swing and Halloween decorations looking awkward a few days after the holiday, it is time to open Burgundy with class and some maturity.

Domaine Faiveley founded its winery in 1825 on their rail shipping empire.  Slowly they bought parcel after parcel and now own over 330 acres (which sounds adorably small to Americans). With a winery in Côtes de Nuits and Mercurey, the family became a powerhouse.  They even managed to ban Robert Parker from Burgundy, after he erroneously derided them for sending lesser wine to the States.

Today’s treat: their 2010 Gevrey Chambertin.  Gevrey Chambertin gains fame for producing some of Burgundy’s more pronounced, deep Pinot Noir.  2010 was a classic vintage, creating well-structured, high toned reds. Erwan Faiveley made the wine.  He was 30, with just six vintages under his belt as head wine maker.  His father had created big, rich reds (for Burgundy mind you).  But Erwan shied away from intense macerations and new toasty oak barrels (but he goes to Burning Man annually…go figure).

After six years, how does it fair? 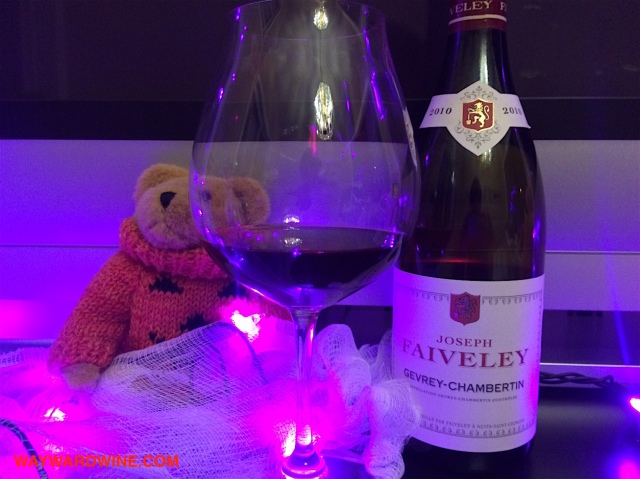 The APPEARANCE has a clear, medium intense ruby core swapping to a pale garnet rim with knuckles for tears.

The PALATE feels dry, medium plus acidity carries throughout but is gently tamed but the silken tannins, mildly warm 13% alcohol, and medium body. Pure velvet this: supple, forgiving, yet structured.

Outstanding: 5 of 5. Faiveley’s 2010 is probably the best Pinot Noir I have enjoyed this year. It has another solid decade in it at least, but right now teeters freshness and maturity well.

Breathing this wine is like walking through a warm forest. It is late summer. Dried leaves and twigs crunch beneath feet. Berries surround you. It feels like any spark could burst it into flames. But presently it is quiet, on edge but contained.