While I was coaxing kit juice and blueberries into pseudo-wines, 2010 saw a decent growing season in New York. The state generally has a cold, miserable climate. We grow unknown grapes tough enough to ripen under a distant sun (including household names like baco noir, chambourcin, colobel, vincent, aurore, catawba, concord, vidal blanc, muscat ottenel and niagara). Only regions with deep water heat sinks, such as the Finger Lakes, Great Lakes, Long Island‘s Atlantic or valleys, like the Hudson, can protect grapes from frost, freeze and rot long enough to ripen into profit. 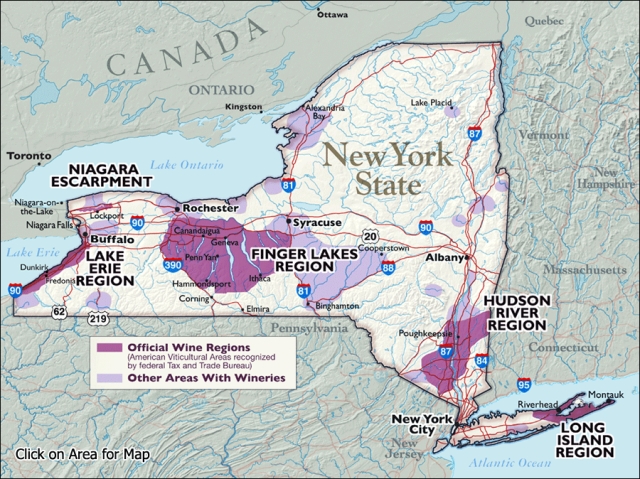 This year was different. Unlike the rain and cold of 2009, April set record highs. May’s warmth pushed the freeze warnings aside. Budding and flowering followed weeks earlier than usual. By June all vines were in bloom. A warm and sunny summer ripened fruit consistently. The vintage was twenty days ahead of average, according to the NYSAG Experiment Station. Many growers started harvest as early as August and were wrapping up in October.

Knowing nothing, I go with the first grower I find online. Fall Bright’s lack of internet savvy seems promising. I want a farmer not a web designer. Tom and Marcy Mitchell opened to supply amateurs with grapes in 1978 planting more hybrids in 1982 . Such generation X vines could mean more concentrated fruit with terrior expression (from years of pruning, deep roots and Nirvana albums). These things could make for an easier fermentation and a more complex wine than my Canadian juice kit or blueberry near-disaster.

Fall Bright’s updates encouraged me. By August third, deer and birds were eating the grapes. On a more technical level, grape verasion (color change) and vine lignification (hardening) had already begun. Drought even flirted with their vines, leading Tom to cut the competitive weeds. By September 18th some varietals were already coming in and selling out within days.  I had to pick out grapes and fast.

Now, New York can turn more marketable grapes like riesling, cabernet franc, chardonnay, gewürztraminer and pinot noir into brilliant wines. But in honor of the state’s more experimental side (and not at all because Fall Bright was sold out of riesling and gewürztraminer), I chose vignoles grapes. Fall Bright even claims vignoles is “one of our favorites, clean, big full bodied. Its Pinot Noir parentage comes through.” Sounds good…

But first, a bit more background…

Follow Wayward Wine (WSET3) to tour the world's exciting vineyards, breweries, and distilleries, while discovering new drinks.
View all posts by waywardwine →
This entry was posted in VIGNOLES VENTURING. Bookmark the permalink.