Since January 30th, my life and this wine journal have been frozen. Imagine Han Solo in carbonite for four months. But instead of pining away for Leia, he crammed for a wine test.

He could use a drink.

To make wine my future, I needed to conquer the Wine and Spirit Education Trust’s (WSET) Advanced Level Three certification. The WSET is THE internationally recognized educator in all things alcoholic. Anyone, who meets the prerequisits can take it. But it is geared towards training wine professionals (critics, retailers, importers, distributors et cetera). In other words, those too poor to make wine and too proud to serve it at restaurants (although many oenologists and sommeliers take it).

Passing the Advanced would gild my resume with “He’s not just an alcoholic”, and personnally just make sense of things (such as the must weight of Aszu 6 puttonyos Tokaji). However, the Advanced is merely the midpoint. The Diploma Level and, finally, the impossible Master’s of Wine lay ahead, which some years no one passes.

But flash back a year and a half. I had passed the Intermediate certificate with Merit. I went to class, read the book once, and then sauntered through 50 multiple choice questions. It made body out of my scattered knowledge and made selling the stuff easier. But now those 98 pages resemble a magazine, printed in a font size for the poor-sighted, with more pictures than text.

When my boss decided to offer the Advanced course, I elbowed my wife into taking it. We had toured countless wine regions and emptied thousands of bottles together. Although not in the field, she had absorbed enough of my wine magic (i.e. babble) via osmosis. At least that is what I thought. But then the tome arrived fresh from London: a dense 278 sheets of suffering (the green one in the photo).

Look out blue Intermediate Book! The Advanced could eat two of you!

Mondays gradually became torture. Six glasses would sit before us, like black holes gaping their hollow glass mouths at our inexperience. One night, we tasted three whites. They seemed exactly the same, yet, obnoxiously, were not. They were all German, all riesling, all from 2003, all were medium minus intensity gold, with seemingly equal levels of acidity and sugar, body and alcohol, with outstanding length, quality, and price.

Yet, annoyingly, each came from a different place and sugar must level. The trick was to identify that the more northerly Mosel was made from riper musts, while the central had average ripeness, and the southern Baden was the least ripe. This range of climates (from cold to warm) against sugar must levels (from ripe Auslese to lean Kabinett) balanced out any structural differences in the wines.

Yet my employer would fling at a victim, caught in mid sip, “Body? Light, medium minus, medium, medium plus, or full?”. They would mumble, “umm…medium”, someone would blurt, “No, I think medium minus!”, while I was still dwelling on the acidity, and my wife on her workday. Scared, scarred, and hardly inebriated enough, we got nowhere.

After weeks of this, however, we started to agree on what was medium bodied or not. It became a great game of elimination. We could winnow away impossibilities until we got decently close to identifying the where, what, and how much of each evil glass.

Going unnoticed, however, the chapters were creeping through Europe, the Americas, South Africa, Australia, New Zealand. All too quickly we had a month left. We took a practice exam and the tartrate crystals hit the surface filter.

The weekly routine of reading a chapter and letting my boss pummel me about aroma characteristics had almost become comfortable. But I was not absorbing enough data. The WSET is all about old-school, very British, rote memorization. Dickensian rulers on knuckles. Examiners do not care about my critical thought or flowery prose. If I cannot spell Olasz Risling, I am screwed.

It hardly helped that this new edition was a mess of errors. A mystery estuary, called the R. Girande (sp.) followed me from Bordeaux to the Alpine foothills of Italy. Oh, and the third most planted grape in Germany is Pinot Noir…and Silvaner. Wait. Luckily, I was not taking an exacting, old-school, very British, rote memorization-type exam! ha. ha. ha.

So my wife and I hunkered down at the kitchen table, turned up the electronica on Pandora, got out the iced tea, and studied until we were too hungry or too saturated to think.

After each day’s cram session, all we could handle was anime fluff, such as Princess Jellyfish:

No. Seriously. We were that broken. 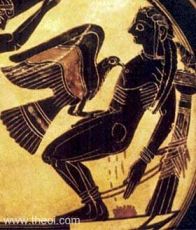 Like Prometheus, I had stretched my fingers out to the fire of wine knowledge, just to be bound, with guilt pecking away at my sanity. Had I studied enough today? Why not review notes on my walk to work, in the bathroom, in bed? Why not practice tasting notes on coffee, toothpaste, air? Does that pen, nervously gnawed on, have medium or medium plus intensity flavors of plastic, mineral, and frustration? If so, was it made in China or Thailand?

With weeks left, we each rewrote the book by hand, yes, the whole book, praying via pseudoscience that the visual/manual stimuli might help us. My wife became the Delphic oracle, whispering chapters out loud to herself in a textbook-induced babble. We practiced short answer questions and drank through all the pricy wine that we had saved, in hopes of broadening our palates.

Indian food didn’t let my stomach sit the final practice exam. It went so well for my comrades, that they pleaded (somewhat angrily) that the exam be extended another ten days. A day later and recovered, I sat the practice exam. However, I was alone in the shop and had to sell wine, deal with suppliers and phone calls. It took twice as long. Hardly ideal examination conditions but my fault.

Either way, I kept studying. I passed the practice exam with crawling colors. My rewritten book now clung to my side. I would wake up and grumble through my aide–mémoires and try not to panic.

I had 48 hours off work before the exam. Enough time for one last info crunch. I focused on France, since the book clearly had a thing for the frogs. But I could hardly forsake Madeira cask temperature ranges or pot still congener reflux in London Gin. So I reread everything.

Hours before the exam my wife and I went to watch ducklings in the park. A huddled ball of puff and beaks yawned at as. I would glance at Sherry styles, then back, where a webbed foot stretched out from the ball. The ducks were right. I need a nap too. Let’s finish this.

Students tumbled into the wine store, which had been our evening torture chamber for four months. Anyone who wore glasses had forgotten theirs. One drove an hour but had left their license at home. Two had left tasting glasses behind. I was barely breathing and waiting for dinner to revisit me. Not a stellar crew, but dangit, we had all made it.

I ignored instructions and wrote my name in lower case. Nice start. For the first hurdle, we wrote tasting notes for two wines. Tricky things, both clearly northern French (classy, with controlled rusticity and lots of acidity wanting food). The white was oddly overt and fruity. I flipped and flopped between Alsatian Gewurztraminer and Sancerre thrice, until landing on Sancerre (impressive but just not exotic enough for Gewurz). The red screamed Beaujolais-Villages’ tart red fruits and olive. Good enough.

Then came multiple choice questions and short answers. Most of my head was in it, remembering vital-in-emergency things like the grapes of Spanish Cava (peralda, macabeo, xarel-lo) or the soil in Chablis (Kimmeridgian clay). So, if you end up trapped in a cave, I cannot save you, but I can tell you whether its ambient temperature and humidity are adequate for secondary fermentation of sparkling wine.

The test flew to its finish, the boss opened grower Champagne, and we trundled home. Now eight weeks of pin-standing until we get our scores back.

My advice. Get reincarnated as a duckling.

ADDENDUM: My boss e-mailed us results while my wife and I were in Iceland, a few weeks into our seven month Euro tour. I was the only one to pass with Distinction out of our class. While my wife, certain she would never pass, passed with Merit. Already in we had some fabulous beer to celebrate.