Our social insecurities about copulating pair beautifully with our concerns over alcohol. We giggle and titter at both because, although natural and basic, they seem to be taboo, private things. As kids, sex and drink were foreign, even forbidden for most. We carry that baggage into adulthood. Even as adults, we find it awkward to talk openly about sexual positions or binge drinking with strangers, grandparents, or children. Mass entertainment is founded on poking but not pushing these boundaries. Wine is no exception.

This wine “examines what happens when you put three attractive, single, young grapes in one exquisite bottle. It’s fun; it’s exciting; it’s legal in most states”

False advertising aside, Ménage à Trois taps into our need for safe escapism, by not-so-obliquely referencing threesomes. Opening a bottle gets our friends’ attention. We appear vaguely risky. We nervously laugh about the thought of group sex and let the subsequent inebriation and horrendously bland wine numb our nervous inner child. Such a forgettable social lubricant might even get us laid by disassembling inhibitions.

Titling it in French adds the vinous caché of wine’s symbolic home, France, and an exotic Parisian tint of sexual dalliance. Surely, a ménage à quatre or, gods forbid, …dix avec chien et poulet would go to far. But a third party is within the realm of fantasy or at least low budget pornography. Even if we can’t have threesomes, the bottle allows a false sense of adventure.

Countless customers ask me, winking, “do you have…you know…that sex wine?”. I stare blankly back at them. “You know…it’s a blend.”. Still nothing. “It’s really really good and cheap.” After allowing them to bastardize the French, I show them alternative blends. Astounded that Ménage à Trois didn’t invent blending, they either leave or begrudgingly buy something less titillatingly titled.

Hitching a ride on the pseudo-sexual bandwagon, is Jamesport Vineyards of North Fork, Long Island. I reported last week that their wines and winery are respectable. There were no koalas or cats on a label for miles. But then, there was Mélange de Trois. 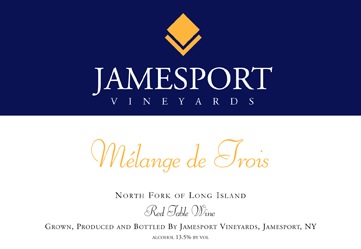 I ignored the name. Through the tasting, the quality was too good to forget, so I bought a bottle. But four months later, I opened it with trepidation.

Jamesport’s site implies: “This provacative [sp] blend of three dares to be sipped and savored.” The only provocation here is risk of lawsuit from Folie à Deux. But behind the innuendo and spelling spoof, this is a traditional bordelais mix of 49% Cab Sauv, 25% Merlot, and 26% Cab Franc. And it’s a pretty strong tripling.

Old and new French oak barrels were used with restraint, allowing dark berries and bell pepper to lead the march. Some fruit seems harvested late, with traces of raisin and dried cherry. The main tell that we aren’t on Bordeaux’s left bank is the high acidity. Long Island’s climate is 2 degrees cooler, 13.2 inches wetter, and slightly more seasonally extreme than that of Bordeaux. This means shorter, cooler seasons that translate into acidities that pierce the palate and demand food.

Yet if Jamesport’s wine is so decent, why pander so halfheartedly to a base anxiety? This is a thirty dollar bottle, which, against all reason, trades amongst the terminology of the ten buck realm. Maybe Long Island’s obscurity hurts too much. Maybe it started as a semi-rebellious pun against big wine. Maybe piggy-backing off of others success is all they can hope for. Either way, I’m sure it sells.