If you drive southeast of Rome on the A1, the hills fold, one upon the next, building into the Apennine Mountains. Along the way, Anagni, a medieval town, hangs on a ridge, encrusted with Roman stone walls and cinder-block apartments. 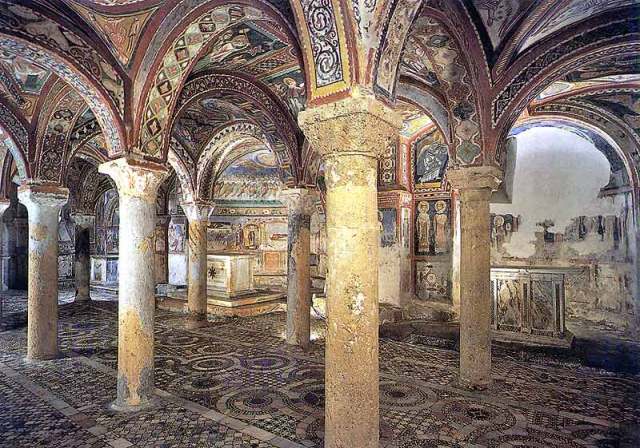 Below Anagni sits the vineyards of the Azienda Agricola Colletonno (Colletonno Agricultural Estate). Colletonno is serious about history. They titled today’s brand Corti dei Papi (Court of the Popes) in honor of Anagni’s past as birthplace and getaway for four popes during the 14th century (until Philip, King of France, moved everyone to Avignon). Today’s wine label bears a frescoed Romanesque/Byzantine vault, cropped into a pope’s miter, from the 13th century crypt (above) in Anagni’s main Cathedral.

Testamenting to books Old and New

Three vineyard-covered hills surround the Colletonno (literally “hill circled”) estate. The wine Colle Ticchio is named for the hill from which its grapes grow. Ticchio hill is 1,200 feet above sea level and consists of clay. Its elevation and soil lend the wine structure and complexity.

In blue on your center right: Cesanese DOCG

Although most wine in the region of Lazio (mapped) has become white (95%), Colletonno lives in the past. They make one of the few reds left to Lazio: cesanese (chay seh nay say). Today’s wine consists equally of two disappearing clonal types of cesanese: di Affile and Comune. Also feigning time-travel, Colletonno took old facilities and refurbished them to look old but work like new.

All this tech lends winemaker Landi an exacting control. It ensures that cesanese speaks like cesanese, but in a modern tongue. Sure, the wine tastes of earth and plum but its modernity lies in its cleanliness, in its the moderated tannins, acidity, body: as you can see in my nifty chart below:

Like the town of Anagni, Colle Ticchio looks to the past. It presents an ancient, disappearing grape, rich with earth, roasted mushroom, and warm fields of wheat. For a moment, you think that you’re in Ridley Scott’s Gladiator: running your hands through your harvest, wearing Roman armor everywhere, and being at one with your land.

Yet, as hard as Russel Crowe furrows his brow or fakes a British accent, he’ll never learn Latin nor realize Emperor Commodus didn’t die in the Colosseum. Equally, all the restored walls, churches, and frescoes of Anagni won’t hide its apartments, asphalt, and supermarkets.

Anagni: bipolar present and past

Neither will Colle Ticchio resurrect the past. It’s too clean, balanced, and well, surprisingly good to do that. Instead, we should shed the fantasy.

This is a great wine, that while trying to fabricate antiquity, ended up creating something that matters now. Its flavors of wheat and earth overlay plum and tart red fruit, all of which sing alongside spaghetti alla ciociara, mole sauce cheese enchiladas, or anything with a bit of herb, black pepper, lamb or anything delicious with dark or salty flavors, especially at under $15.

The Compasionate Hedonist’s visit to Anagni