Having dipped a toe in Scottish Whisky Ales, let’s familiarize ourselves with how the Scotts handle and then break the standards.

This lager spawns from, hold your breath, “Scotland’s most southerly brewery”: Sulwath Brewery.  Maybe it rains less there?

Their “Galloway Gold” checks all the lager boxes: clear, medium minus intensity gold color, fine white lace.  But wait?  Sediment!  The nose is equally quiet, with a minor note of golden crisp apple.  Dry, med acidity, little bitterness, average alcohol at 5%, and its minimal body all play to type.

Yet, somehow the flavors compensate with medium plus intensity orange, clove, apple, chamomile, slight cardamom, and slight malt.  This is very fruity, flavorful, and fresh, thanks to whole hops and Scottish water.  A respectable good (3 out of 5), for a beer style with little place in my heart (unless there’s BBQ).

He’s angry. His beer is, well…

In Stirling, beneath the shadow of Braveheart’s monument (see photo below), my wife and I briefly let loose our tourist-trash-tendencies.  We bought Traditional Scottish Ales’s William Wallace… beer.  Oxymorons couldn’t be prouder.

This tasting note is for scientific purposes only.  Think of it as a standard measure.  One must know the bad to define the good.

William Wallace’s looks were average red, even the thin froth on top was beige (the beer, not the historical figure).  Oddly, my nose picked up strong notes of peanut brittle and honey.  Most structural bits were medium except for an uptick of acidity.  Upon my trepidatious tongue peanut brittle again dominated, with honey, apple skin, and an average length finish.

Like Mel Gibson recently, “William Wallace” was odd, old, but hard to ignore.  Quality steps up to better than acceptable (3 of 5) but hardly mounts a bagpipe squealing, kilt flipping, blue-faced offensive on the Brits.

We shall never be peanut brittle flavored.

No, It won’t give you crabs.

Gods!  Where went summer when you need it?  Screw lemonade, Mike’s Hard junk, or otherwise.  This is ideal for frying on a beach.  They even make an orange one.  Perfectly good (3 of 5) and fun.  If only Scotland got more than a day of sun per year.

Now lets delve further back in time, to Heather Ale.

While hiking volcanic domes of Sky Island, wild grass blanketed wind swept rocks.  Amidst the green waves quietly glowed purples, pinks, whites, and blues (turns out purple isn’t a color).  Wee buds of heather laced the ground.  Curious, I picked a stem.  It smelled lightly floral, like mild chamomile with tinges of savory herb.  I ate it.  Bitterness ensued, but beneath that, light, honeysuckle honey.

In Alloa, Williams Bros Brewing Co got nostalgic and copied a 16th century Scots-Gaelic recipe.  To beer-familiar malted barley, they infused heather flowers (they call its liquid bree), and sweet gale (aka English Bog Myrtle, aka bayberry bush, aka shrub), and then fermented everything in a copper tun.  They called the result “Fraoch” (heather), and popped it into a bottle that belongs at a Medieval pleasure fair. 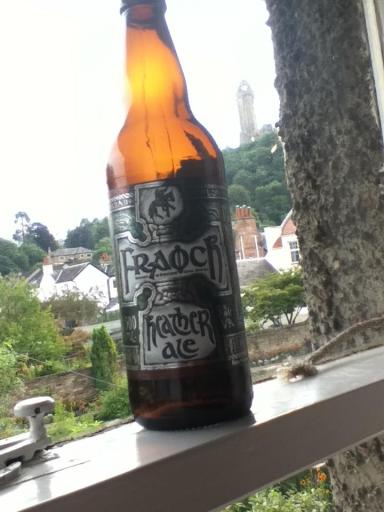 William Wallace Monument watches over this kin beer in our apartment in Stirling.

Inside, we find a clear, medium intensity amber color, with fine small steady bubbles and a one-centimeter cream-colored head.  The aromas have medium plus intensity scents of, well, heather, obvious malt, ketchup or tomato, and that other Scottish staple: peat (a smoky, wet clay-like scent).  The palate is dry, with medium plus acidity, medium minus bitterness, medium 5% alcohol, medium body.

It feels soft and floral up front, followed by slight prickly hit of dried herbs and light paper smoke on the finish, waking you back from the past.  Light caramel malt makes up the core, while heather florals carry throughout.  The length is medium plus.  The quality is very good (4 out of 5). 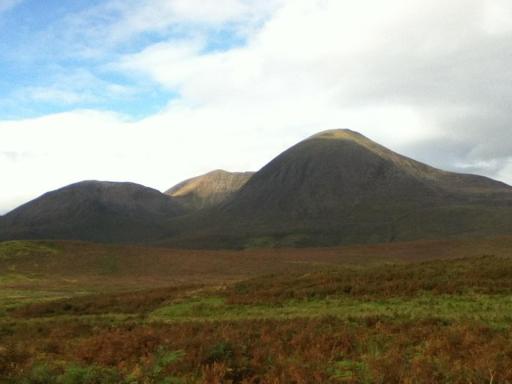 Our hike through Sky Island.

This beer keeps up a friendly, steady conversation.  No real focus.  Time disappears.  But you don’t really care.  Just drink this one.  Foodwise, mild stuff, salted nuts might work.

Avoid lager and labels with historic figures.  Do add Heather Ale and Ginger Beer to your must-try list along with last week’s Whisky Ales.  They bottle traditional Scottish signifiers, adding new types to beer’s desperately narrow ecosystem.  I’ve even found these at BevMo and other retailers throughout the United States.