For our first Dublin morning, the liquid brunch at Stag’s Head and tempting Celtic Whiskey Shop had simply whetted our palates.

Now, annoyingly sober again, we follow the River Liffey west.  Having tasted the antiquated, we search for Dublin’s modern face.

Across the street from the stoic Christ’s Church Cathedral, grins the The Bull & Castle like a red and green Cheshire cat: 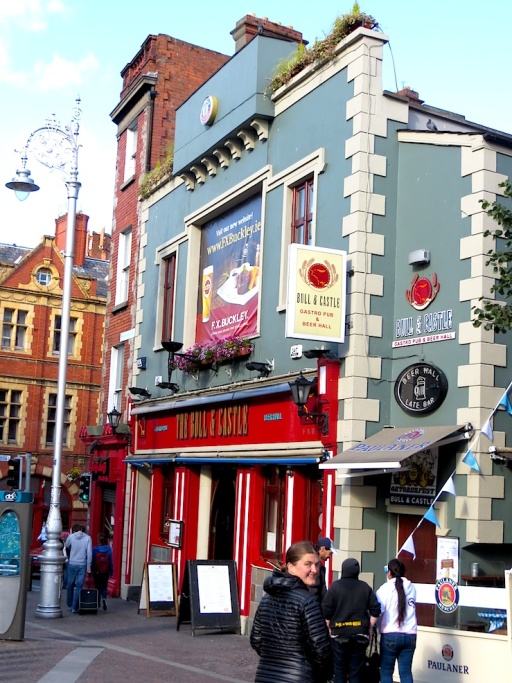 The Bull and Castle.

We cut inside and sit at attention before the gleaming copper bar.  Our young, smart barman treats us lightly and slides the menus to us.  Over twenty Irish breweries on tap pack its pages.  Wines, and beers from Germany, Austria, Belgium, and beyond provide competition.  One thing not on the list: Guinness.

F.X. Buckley: a six generation-deep meat purveyor-cum-steakhouse founded this beer hall.  It prides itself on pouring local microbrews and other rarities.  The tourists can find their Guinness everywhere else (*cough* like us this morning *cough*).

We embrace rebellion and order two massive glasses of local:

Brothers Seamus and Eamon O’Hara founded the Carlow Brewing Company in 1996, a time when no more than a dozen breweries had survived the macro-brew dominance of 20th century Ireland.

Today, Carlow is one of the largest craft brewers on the island.  They make this beer exclusively for the Bull & Castle.

It looks a hazy, average gold, with a centimeter thick white head.

Stronger aromas of honey wheat and caramel greet my nose.

The palate is dry, with extra acidity, average tannin, lower alcohol (3.8%) and a mid-weight body.  Flavors present stronger than normal notes of creamed wheat, orange, and pith, followed by a medium plus length that snaps with lovely grassy bitterness.

The F.X. Buckley Golden Ale is very good quality (4 out of 5).  One could and should drink this anywhere, at anytime, with anything, or anyone.  Well, maybe not a recovering AA member.

However, by now, an Irish beach-ball in a sweater-vest was holding our conversation hostage.  Deep past his third pint, he had quietly worked his stool over to us.

While we learned about his grown kids, fishing, weather, Dublin, pet dogs, politics, et cetera, I snag a photo of our second beer, but -drowning in his Irish gab- failed to make a note.

Now our first day in Dublin also coincides with the city’s Open Doors festival.  We could go home, but everything becomes free tonight.

Beer-fueled, we cross the River Liffey to a gentrified industrial sector. 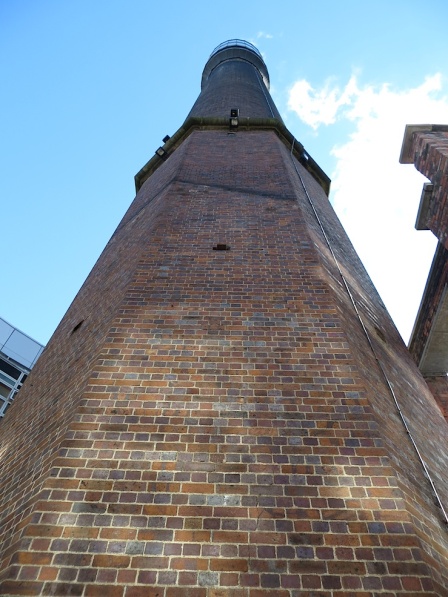 The smoke stack of the Old Jameson Distillery looms over us.  Its free tour also beckons us.  But our stomachs grumble that we haven’t eaten in eight hours.

With fists and mouths now full of magic cheese bread, we fall into line.

Once the line wraps around two blocks, we start shuffling in.

Through the doors, our herd gets handed Jameson tarted up with something disturbingly citric and sweet.  It tastes like their bottle chandelier looks: coy, clever, but cheap.

Glasses in hand, what follows is a heart-drooping amalgam of Madame Tussaud’s Wax Museum and a dead distillery.

The warehouse’s skeleton hangs over us, a silent victim of modernity.  We follow ramps past the stages of distilling.  Massive copper tuns gleam with Industrial Era bravado. 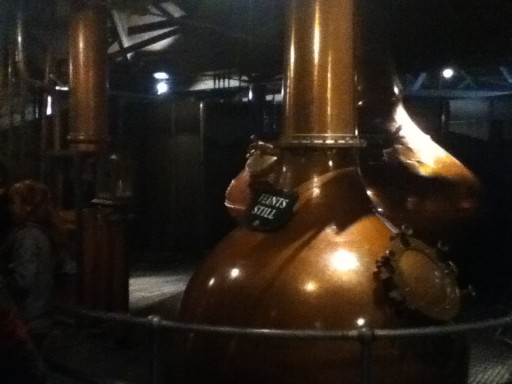 Yet it feels like walking into a church converted into an art gallery: you’re glad they preserved it, but melancholy creeps in.  Whatever life and culture that throbbed here has left town.  Even the mood-lighting depresses us.

We step down into the massive gray cavern.  Hordes circle the many tour guides talking over each other.  Our sweet lady with a shock of white hair walks us through its history. 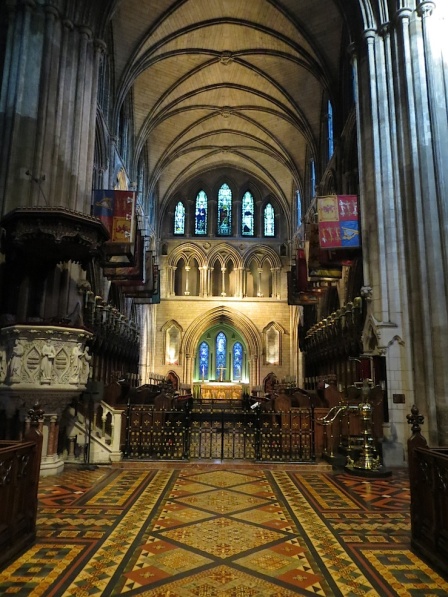 She even lets us into St Mary’s Chapel: a calm, columned apse of blue and white, where more private ceremonies occur.  It is lovely, but our guide shrugs at the drop in converts.

With sun setting, we join the crush at Dublin Castle.  A jumble of eras, the interiors gleam with gilding on the white and cream walls.  Too tired to waltz with the mob, we move on.

We pass on the massive line at Madame Tussaud’s.  We just saw Jameson’s morgue.  Art galleries don’t excite us either.  Instead, we jet over to Trinity College for one thing: the Book of Kells.

After a long wait and a meandering line, we enter the museum.  Large black monoliths display shreds of brightly painted parchments.  The walls are cluttered with text about cultural context.  But we are too overwhelmed and too tipsy to read a book on a wall with a crowd.

We cut straight for a red room at the end of the hall.  At center, with people like fingers clawing over it, sits a case at waist-level.  We wedge in.

Words or photos waste its worth.  The Book of Kells patiently weaves a frenetic tapestry of hair-thin, multicolored gems.  Its seeming symmetry creates architecture out of chaotic lines.  Nothing compares.

A contemporary illustrated manuscript sits beside it.  It looks sloppy and childish.  Yet I know, even it is amazing.

Mentally blitzkrieg-ed, we wind upstairs in the bluntly-titled Long Room.

In a word: Immense.

The Guinness harp, Ireland’s oldest, stands proud, fat, and ornately carved in a case.  Documents and stuffed animals scatter the room.  It all smells of lacquer, books, and antiquity.  Brilliant.

We stop by another church.  But shaking from cultural overload (and starvation) we catch the metro home to Blackrock.