SAQ: When Government and Wine are One

Dear reader or two, please accept my apologies for the hiatus. But fret not, for my vacation to Quebec City was fruitful, or at least wine-filled.

Try to contain your excitement.

Immediately upon arrival, I popped into the Metro Plus grocery store. Past the beer, blueberries, beer, poutine mix, beer and maple syrups stood a rack of twenty or so wines. No bottle cost more than fifteen bucks. Reasonable enough. Most were European. Fine. Five were “Canadian”? Ah well. Fewer had a vintage. Ugh. One or two had a region appellation. Crap.

I caved. The 2008 Blaye Bordeaux from Laland Bellevue would have to do. At least I knew where, when, and what went into the bottle. The next day I bought the non-vintage Côtes du Rhône (no vintage and cheap usually translates into a winery or company’s entry-level, bulk wine). Both were drinkable but little else. (It turns out that grocery stores can only carry wines bottled in Quebec: limiting range and quality).

Experiment over, I gave in and went to SAQ. This inelegant acronym stands for the Société des Alcools du Québec.

Spawned from Canada’s dalliance with prohibition in 1919, Quebec

enforced temperance instead by taking over all alcohol importations, distributions, and sales. Being very French Catholic, a customer ordered bagged, unlabeled wine hidden behind a confessional-esque screen one bottle at a time. The following decades peeled away these restrictions, and today SAQ allows customers 18 and over to shop like real, normal people.

As with healthcare and electricity, SAQ is a state run corporation. Quebec’s Minister of Finance holds all its shares. The government picks directors. SAQ’s select club of distributors send professional tasters to find wines for exclusive import. SAQ bottles and labels some of them, while world renown brands fill out the rest.

You can find many wines that don’t make it into US. Quality and price ranges are reliably consistent (few critter wines or plonk). Staff members know their stuff. Stores are clean, organized by region, and wines carry descriptive tags and color-coded circles that oversimplify flavor and style groups (e.g. fruity and rich). Tastings, classes and consultations happen frequently.

With a monopoly on wine, SAQ keeps face by sponsoring events for free throughout the year. Booze-fueled geek fests and performances, such as the SAQ New France Festival, which I gleefully attended (below), redefined how history and alcohol go together. 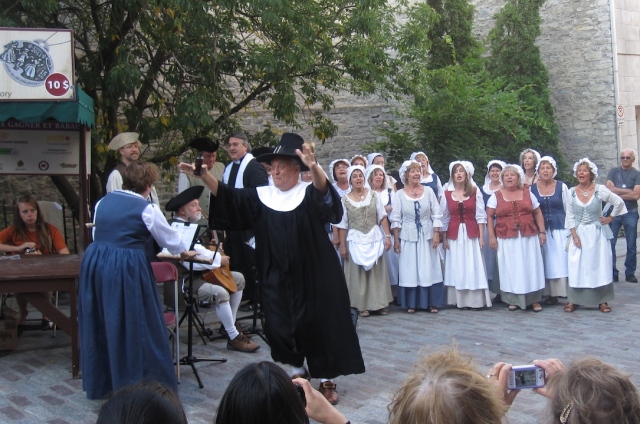 There is one problem: selection.

Nearly all wines in grocery stores, restaurants, and shops must be from SAQ. From one store to the next, the stock varies slightly. But it gets redundant. To create a false sense of variety, you can go to a SAQ Dépôt, Express, Classique, Sélection or Signature. They are like snowflakes, but more classist: similar but not exactly the same.

There's no wine after dark at the St. Jean street SAQ Classique.

Poor regions and strip malls get the Express. The SAQ Classiques I found on Rue Cartier and St. Jean had wider selections, tastings, and better dressed people in them. Fancy shelves, expensive bottles, and conscious staff were discovered at the SAQ Sélection on Boulevard Jean Lesage. The SAQ Signature in the Fairmont Hotel was a veritable crystal palace of wine, with 70 dollar ice wine free to taste, a winemaker lecturing, rare local wines and a full gamut of prices, styles and regions. Nevertheless, every store sells the same core wines.

SAQ’s prices are reasonable but feel fake. Like pretend capitalism, SAQ charges according to customer willingness. But it’s in a void. There’s no competition to lower prices. The SAQ down the street will cheapen its Beaujolais when people stop buying. The 13.5% tax further inflates the price.

But enough economics. Back to drinking.

I stuck with France. SAQ’s strength clearly lies with France, at any price (probably due to racism…I mean customer loyalty to Quebec’s mother country). Other wine regions are well represented but cost more than in the states.

Is that smoked pine?

At $14.10, Georges Vigouroux’s 2007 malbec from Cahors showed off solid body, an intense nasal attack of mint, pine and black raspberry, and a rich palate of spice, kirsch and black cherry. No complaints. Gourgazaud’s 13 buck Minervois (right) -made mostly of carignan grapes- was equally acceptable: with uniform acidity, tannin, body and length, and darker flavors of licorice, truffle, cola, pepper and black cherry. Botter’s Extra Dry Prosecco was a nice break from all the reds, but cooed and patronized with too much sweetness, dead acidity, and flagging fizz.

Quebec leads Canada in wine consumption. Since SAQ controls nearly all alcohol sales, they have super statistics. In a year, your average Quebec-er drinks half the wine a Frenchman does, not shabby, but more than twice your average, American Joe-sephine. 21.4 liters: that’s over two bottles a month, for each of-age palate. What shocks me is that with the isles and isles of beer, 77.9% of store bought alcohol is wine. At restaurants and bars, all you see are pints of beer. But wine clearly dominates kitchen tables.

Somehow, Quebec nearly pulls off the trick of making communism taste like capitalism. Their monopoly on wine seems diversified enough to meet the demands of its still very French population. SAQ educates its customers and elucidates the buying process. And yet, it’s a false freedom. Their selection is amazing for one company but redundancy creeps in. Prices inch higher than in the states. And taxes remind you to attend the next free, state/SAQ-sponsored performance.

Me and SAQ's wine giant for the New France Festival Parade.

But I can’t leave Quebec without drinking Canadian. Tune in next week.

US and French Wine Consumption

4 Responses to SAQ: When Government and Wine are One