It all began with a dead squirrel.

In 2010, I stumbled onto a BBC article.  It highlighted controversy spinning around 55% alcohol, £500 beers from BrewDog brewery.  They called them “The End of History”: a squirrel pelt sheathed each bottle with its tea cosy-like carcase.

Think of it as recycling.

They represented BrewDog’s latest stab at making the world’s most alcoholic beer.  I had to try one.  Sadly, they sold out immediately, never to come to the US.

Fast forward to 2012.  Before I left for Scotland (and this seven month Euro tour), Oz Clark and James May’s “Drink to Britain” BBC program re-sparked my interest in Scotland’s largest independent brewer.

Now in Scotland, I ease our way in with some basic bottles.  Our visits to BrewDog’s bars will come next week.  At first, we float through Edinburgh’s grocery stores.

Poured, this has far more orange color than most lager.  It smells pleasant, if quiet, with fresh strawberries, lemongrass, and rye.  It is refreshingly tart with a flick of bitterness, average 4.7% alcohol, and some body.  Flavors include apricot-filled puff pastry and some kinda weird, complicated, honey wheat bread.  Length is medium.  The quality seems good (3/5).  It might confuse most Lager drinkers as being fruitier and richer than they’re ready for.  Nice but not moving.

Their Trashy Blond almost lives up to its moniker: easy and airy but hardly trashy enough. Similar to the 77 Lager.  Moving on…

5 A.M. Saint is good (3 of 5), but a bit average for BrewDog (which is a compliment).  There’s some spice and complexity, but acidity outpaces both.  Imagine Newcastle but actually fresh, with a life, and less doughy malt extract. 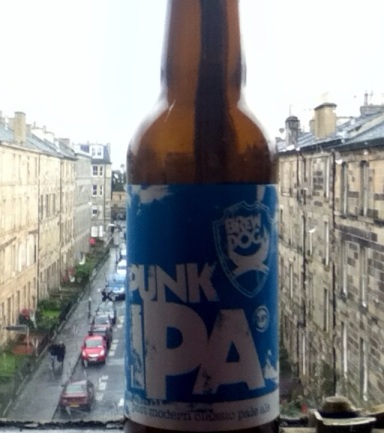 Flavors stay easy with clove, bright fresh lemon tart, peach, rye bread, and a sliver of onion.  The finish lasts longer than average.  Punk IPA is very good (4 of 5), but far too pretty to be punk.

Don’t expect a revolution from any brewery’s entry-level beers.  I expected shock and awe, but BrewDog knows better.  You can’t ween a baby from milk onto Port in a night.  We Budweiser-bingeing plebs need training wheels before we can drink a squirrel-wrapped bottle with 55% alcohol.  Expect greater things from BrewDog in next Monday’s post and in the following weeks.

You can find BrewDog stateside at BevMo and others.