Tonight is Halloween.  But it ended weeks ago.  The legions of Martha Stewart, Food Network, Saveur, and more have already infiltrated our pintrest/facebook/twitter feeds, e-mail, and real mailboxes: 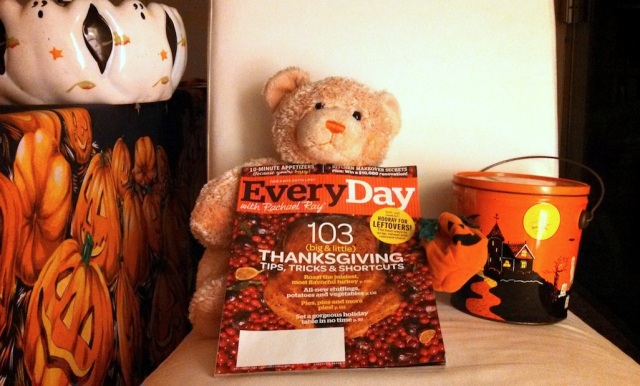 One of these things is not like the other…

While handing out candy to Trick or Treaters, we must give thanks and plot our Turkey Time Tables…obviously.

In the spirit of conformity, let Wayward Wine turn to that standard November red: Beaujolais Nouveau.

Released the third week of November after a forced, carbonic maceration, this tart, fruity red often makes it to American turkey tables.  You’ve probably had it and hated it.  Past posts have proven that Nouveau can be decent.  But its autumnal ubiquity (i.e. overproduction) has damaged real Beaujolais.

So we turn to Juliénas, an AOC subregion of Beaujolais. 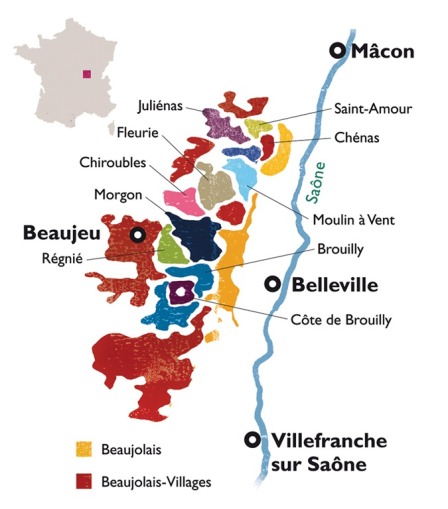 Like Beaujolais Nouveau, Juliénas makes red wine from Gamay grapes.  But any other similarities end there.  Juliénas is made like real wine (unlike Nouveau), with yeast, oak, and patience.  Of the ten Beaujolais crus, Juliénas is famed for its density, spice. and misty, historic relation to Julius Caesar.

He could use a drink.

For this Thanksgiving in October we crack open the Henry Ford of Beaujolais: Georges DuBoeuf.  Since crushing grapes at age 6, the now 80 year old DuBoeuf runs a 2.5 million case empire of Beaujolais for the masses.

Let’s find out how his Juliénas holds up to Fall’s fare.

Yet in wine-isolation, we learn to respect to DuBoeuf.  His Juliénas is a properly dark, dry, complex, brambly red that lacks the residual sugar to bend to such sweet fare.  He declared 2009 the Vintage of a Lifetime.  For around $13, this wine firmly struts its stuff.

So we up our game.  We go savory with Trader Joe’s Pumpkin Ravioli.  Worried even it may be too sweet, we concoct a browned butter sauce with lavender, lemon juice, pine nuts, and lashings of salty Parmesan.  Garlic potatoes and carrots provide the side. 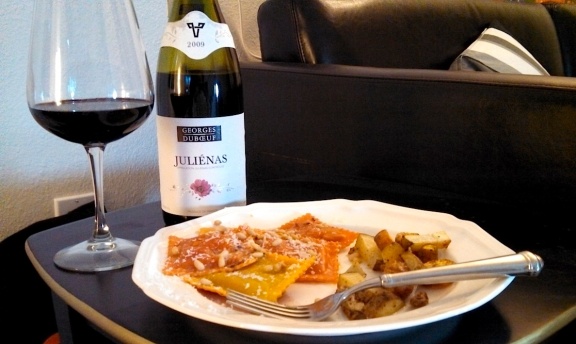 The side of roasted, salted, garlic-ed potatoes and carrots make the wine fruitier and softer.

With the main, butter and savory lavender subsume our palates up front.  Next, the wine’s acidity and minerals, like superheros, obliterate the fat. But immediately, the sauce’s lemon squeeze checks that food-hungry acid.  As planned, the salt of Parmesan cools its tannins.

We chew through the ravioli.  The honeyed pumpkin emerges.  But now it melds with the dark bramble fruit of the Juliénas, creating a soft harmony of grape and gourd that lingers, pleasantly, for minutes.

Neither wine nor dish overwhelm each other.  Everyone gently holds hands in formal dance.  The room feels cosy, crowded, but ordered: warmed by wine, candles, and fireplace.  It’s Jane Austen‘s Netherfield Ball in Pride and Prejudice:

But before Mary plays the piano, or Darcy and Lizzy battle, STOP serving this wine before dessert.  We already learned that caramelized squash kills it.  Imagine Pecan Pie with a side of carbonic acid.  Anything sweet will end in puckered mouths and embittered exchanges.

Instead, serve George DuBoeuf‘s 2009 Juliénas with Thanksgiving’s gravies, turkeys, buttered biscuits, and mashed potatoes: they will step in time with this red.  Even if today is Halloween.

8 Responses to FALL FEASTS WITH JULIENAS: THANKSGIVING’S OTHER BEAUJOLAIS