We harbor an illegal alien.  I worried that customs would confiscate it at the ferry terminal.  Traveling on foot could have hurt it.  Letting it loose in Belfast’s hostel risked too much.  But now, at the Giant’s Causeway, it can finally breath.

Even if it is Scotch in Ireland.

Pronounced “La-froyg” (like a French, Kermit La Froyg), which translates into “the hollow by the broad bay” from Gaelic.  Lovely image.

According to Laphroaig‘s website, “There are 3 main ingredients for making Laphroaig – Barley, Water, and Yeast, but the secret ingredient is the People.”  Some one tell Charlton Heston!  We’ve gotta stop them somehow.  Wait… He died?  So that’s why my soylent green burger tastes like shotgun and chin.

Actually the secret ingredient in most Scotch from the island of Islay is dirt. 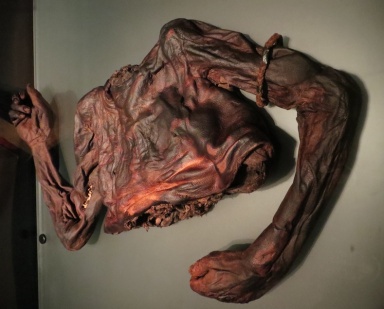 Mr. Beef-Jerky still knows how to flex it.

Scotland ran out of firewood centuries ago.  So they turned to burning dirt.  But not just any dirt.  Peat.

Millimeter after millimeter of dead moss had filled-in swamps each year.  The wet kept out oxygen, so the moss never decomposed (along with everything else, including sacrificial victims).

This dense, anaerobic earth was cut and dried to then fuel fires that dried malted barely.  Peat smoke fused with the barely, which became beer, which became Whisky.

150 years ago, most Whisky smelled of peat’s signature medicinal smokiness.  But by 1867 the Great North of Scotland Railway brought coal and coke to the Highlands.  Each burned cleaner, cheaper, and more efficiently.  Whisky lost its smoke and became associated with its primary fruity notes and barley sweetness.  Blending houses like Johnnie Walker, Dewars, Bells, Ballantines, and Teachers could source, blend, and sell a consistent and softer style thanks to coal and coke.  Americans and noobs went wild.

However, rail and modernity largely ignored the island of Islay.  The style and island became synonymous.  Even under American Prohibition Laphroaig remained legal because it tasted too medicinal to be immoral. 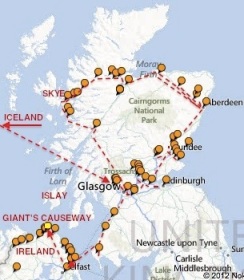 So finally, after days of carrying Laphroaig’s bottle, I open it.  My thinking is that, although in Northern Ireland, we sit closer to Islay than anywhere we visited in Scotland.  These two windswept edges of the UK must share something.  It totally fudges concepts of terroir, but whatever.

It looks like any young Whisky: clear, medium intense gold, with a short watery rim.

But already the room reeks.  I dare stick my nose in.  Crap!  “Pronounced” hardly describes the intensity.  This uppercuts my nose with smoked bacon, menthol cigarettes, Vaseline, vapor rub, and pine forest.

Pronounced pine nettles settle all over my palate, with menthol cigarettes, salt, and vanilla.  The oak is smokey American Bourbon.  But beneath all that smoke and peat streaks raspberry lemonade.  The long finish reminds me of gray clay.

This simply overwhelms straight.  It ranks at outstanding quality (5 of 5).  And the French claim they have terroir.  Hah!  This Whisky was made with local burnt dirt!  Although some might hate it, they can’t deny its intensity, complexity, length, and sense of place. 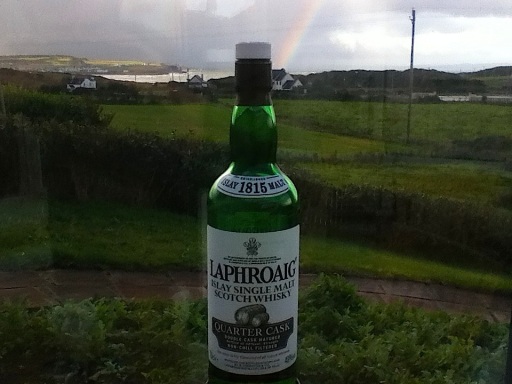 Over the next three days of drinking, orange and strawberry cream come more to balance with the smoke and peat.  Lovely evolution.  I add a hit to my pasta sauce (wine and vodka work right?).  But it tastes disjointed: like sauce with smoke extract.  Fail.

So, what did we just drink?

Laphroaig’s “Quarter Cask”, was aged, yes, in smaller casks.  Why?  They claim that history inspired them.  18th century mules and smuggling demanded lighter, cheaper barrels.  Why not bring them back?

One niggle.  If you follow wine trends, you know smaller barrels not only increase wood flavors.  They also speed up the aging process.  Oxygen transfer and evaporation break down harsh tannins, esters, and alcohols faster thanks to the ratio of increased exposed liquid surface area.  Thus Laphroaig turns out a more mature product (undated mind you), makes money sooner, and frees up expensive storage space: the bonuses of looking backward.

Regardless (or because) of this, their Quarter Cask satisfies immediately.  No cellaring necessary.  So, if you want to taste the wild, windswept isle of Islay all the way down to its dirt (with some clever oaking), try Laphroaig’s Quarter Cask.

Further bludgeoning the place matters, terroir thing home, you can even “buy” your own square foot plot of peat. 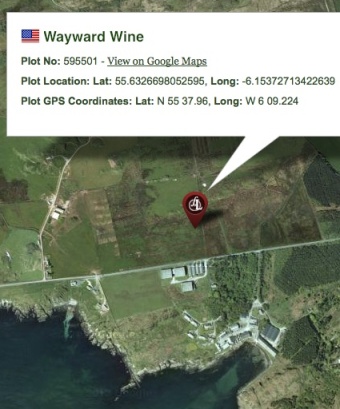 Thanks to a law loophole, Laphroaig saves their water source, the Kilbride stream, and surrounding peat, by letting customers own land redeemed with a code from their bottle.  Imagine, instead of a cereal box toy, you get dirt, magic Whisky dirt.

I need another drink of some burnt earth.