Posted on November 14, 2010 by waywardwine
My weapon of choice is the vignoles grape. I have yet to make a white wine. I do not want a popular grape, like chardonnay, with all its vitis vinifera baggage. I want something the Finger Lakes can grow without immediate reference to California or France. 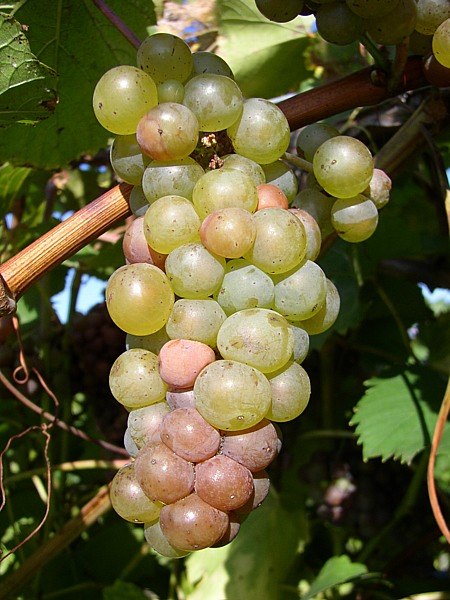 With feigned French origins, pronounce vignoles through your nose and forget the s: “VIN-yole”.

However, to fossilize national identity, French law banned hybrids from bearing famed appellations like Bourgogne on the bottle. So Ravat 51 fell into obscurity. But in America farmers were tired of making musky, foxy wines from the native vines such as concord or niagara (vitis lambrusca). They wanted easy to grow grapes that would buy them retirement homes in Florida.

Enter Ravat 51. With enough vitis vinifera parentage, the grape lacked the maligned muskiness of native grapes and could survive Finger Lake frosts. Acreage doubled from 1975 to 1990 in New York. But to gild the grape in francophilic legitimacy, growers renamed Ravat 51 after a small town in the Côte-d’Or of Burgandy, just east of the capital Beaune. “Vignoles” just had more word curve and fewer numbers than Ravat 51 (although Randall Graham should pun the latter into another UFO wine).

I called Fall Bright with my white in mind. Dearest Tom and Marcy had harvested, tanked and sulfited their vignoles on October second. My first weekend off was Halloween.

Time for a trip.

Follow Wayward Wine (WSET3) to tour the world's exciting vineyards, breweries, and distilleries, while discovering new drinks.
View all posts by waywardwine →
This entry was posted in VIGNOLES VENTURING. Bookmark the permalink.