The clacking hooves of the four horsemen of the apocalypse are upon me.

I just ordered 75 pounds of cabernet sauvignon grapes. That sounds normal (for me). But this ain’t balmy Napa. No, I bought cab. from New York’s Finger Lakes: the last region that should grow it.

You know those rainbow US maps on the back of seed packets? Well, grapes have them too: 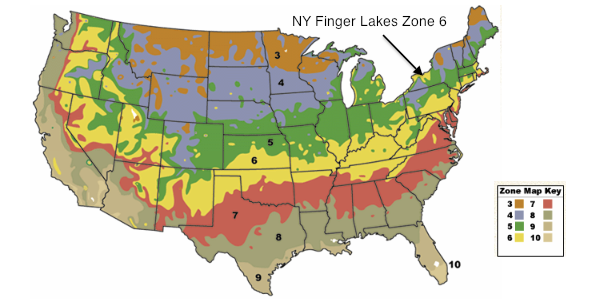 As discussed previously, New York is generally miserable, cold, and horrible for grape growing. Only regions with deep water heat sinks, such as the Finger Lakes, can protect grapes from frost, freeze and rot long enough to ripen into profit. Even then, only some grapes are possible.

Most are unrecognizable natives, hybrids, or crossings: like the vignoles I made last year (which still sounds like fake french). Well-known vitis vinifera grapes include those that already hail from cold places: pinot noir and chardonnay (Burgundy), riesling (Germany), cabernet franc (Loire), gewürztraminer (Alsace), and maybe, maybe, probably not, maybe, cabernet sauvignon (Bordeaux).

Yellow: as low as cab. can go.

The USDA recommends that cab. sauv. is only cold-hardy enough for Zones ranging from 6 (with annual average low temperatures of -10 to 5F) to Zone 10 (30 to 40F). Why? Cab.’s fruit ripens two weeks later than most other varieties, in a good year. Even then it’s vegetal, green pepper tones and tannin overwhelm the nascent fruit. If it flirts with late October’s frost, like me trying to hit on anyone, it fails.

Those yellow splats on that map on your right show the coldest spots this yellow submarine can sink. Fall Bright Winemakers Shoppe is on that edge. They’ve grow cab. sauv. on Keuka Lake for home winemakers since the ’80s.

But the last decade hasn’t been easy on king cabernet.

2003 and 2004 witnessed two nasty, wet summers. Cab. yields were reduced, berry ripening delayed, and vines and buds weakened across the Finger Lakes (see Cornell U. article). Already beaten, 2004’s winter killed 86% of Fall Bright’s cabernet sauvignon vines. Yes, vines, which continued to collapse through 2005’s summer. Fall Bright should have given up. Well, they did. Gamay noir replaced most of that cab.-land in 2007.

So why in Hades am I ordering cabernet sauvignon from them?

First, I want a red.

Second, the last five years have seen fine weather. Especially last season. My ’10 vignoles turned out drinkable, even against my worst efforts. 2010’s cab. sauv. had a Brix of 23.8. That equals 261.85 grams of sugar in a liter, which ferments to a respectably dry 13% alcohol by volume (the norm is a thin 11.5%). Acidities were also worthy with 0.705 titrable and a zippy pH of 3.2 (actually mild for any Finger Lake red).

2011 is shaping up almost as decently, like that hot twin who is only a touch crazier than their sibling.

Sure the winter was longer and colder, delaying bud-break. It was mild though. Sure Spring didn’t dry out until May. But that was followed by drought, which drove growth. Thus far, the harvest is two weeks ahead of average and only a few days behind last year.

Cabernet franc, merlot, carmine, gamay and pinot noir will all ripen the first weeks of October. But I work then. Therefore, I wait until my birthday weekend: October 22nd-23rd, when that late-ripening problem child of cab. franc and sauvignon blanc, will be ready. Probably. As long as it beats the frost…and rains…and hail…and hungry animals…and rot…and mildew…

I could order Californian cabernet. Some wineries do in upstate New York.

Wait. No. That teaches me nothing, is bad for the environment, and the local-ish economy. Worse, my mail-order bride would arrive sterilized, bruised, or frost-bitten.

No. I go local, with a grape that shouldn’t be here.