In my last post, Nova Scotia’s burgeoning wines got a respectful nod. But we cannot ignore beer. Halifax hosts more pubs per capita than anywhere else in Canada. High time we pay homage to its most hallowed ground: Alexander Keith’s Brewery.

My wife and I leave our dorm-tel at King’s College. Our hike turns through Halifax’s tree-framed suburbs. We wander across the Public Garden: a compact, Victorian jewel of iron work, topiaries, and greedy ducks. Next sharp, grey corners of the Citadel rise as we round its perimeter at city summit. The urban center and its silver harbor open below us. The hike eases into a downhill trot. We roll past bar stacked upon bar. Their doors already open. Soon the ground levels out. A granite block warehouse, with large, arched doorways, beckons us.

A closed market courtyard sits at its center. Heavy restoration has tidied up the 19th century bricks. Quaint, beer-themed slogans banner the walls. Unfazed, we give the uniforms at the gift shop thirty bucks. Since the first tour is full, we wander around.

An half hour later, out bursts a youngish actress in 19th century garb from the stair-top. Hands folded, posturing, she blares with false antiquity, “Well! I’ll be, so many here to see Mr. Keith’s fine brewery? Well come on up, if ye want to be trying some ale.”

In 1820, Alexander Keith founded North America’s oldest commercial brewery in Halifax. Like many Scots, he immigrated to Halifax, now flush in the tartan, to start anew. While the port fortified itself against another American invasion (1812 still fresh in the UK’s mind), Keith added hops to beer to stabilize it. Beer bought votes. Keith became Halifax’s mayor, three times.

But back to the tour.

Room leads to room of young but enthused performers, DVD stalling, and fake ferment tanks. Promised to meet Keith but half expecting Mickey Mouse, we finally enter the period pub.

Between pints, our cast strains at new world Celtic song, dance, and tall tales, desperate to murder any awkward silence, or worse, questions concerning beer. Such as, is this really IPA? Where’s the hoppy bitterness? Why does it feel thin and taste of little. Maybe there’s something aromatic, floral, and grassy, but little else. 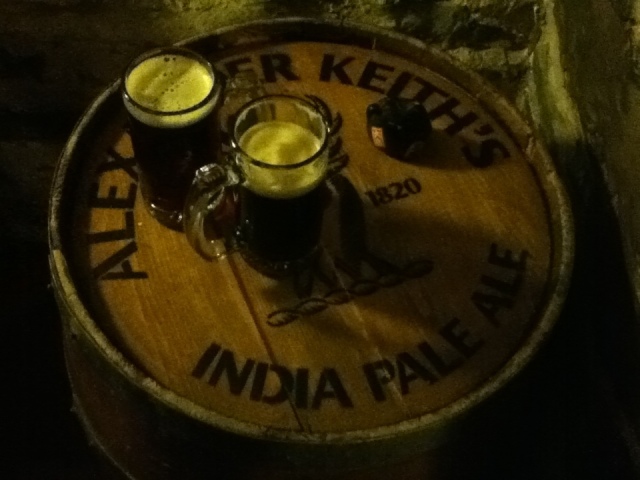 Unfazed, we search through other pints for any sign of character. Keith’s Premium White ale is intentionally hazy, but oddly lacks wheat. The bright acidity and flavors of mild orange, clove, and cardamon add interest. Yet all this amounts to little more than a basic, refreshing drink. His Red Ale is soft, friendly and cider-like. Lastly, his Dark Ale seems somewhat rich, coffeed, but edgeless. Nothing really declares itself. Soon our performers wind up the distraction in song and clapping. They drive us, inebriated cattle that we are, into the gift shop.

Somewhen between 1820 and now (probably when Labatt of Anheuser–Busch-InBev-servitude took over), the IPA of a Scottish garrison needed to feed a softer, more couch-bound crowd. In 2011, Keith’s immigrated to the states for the first time. Worrisome things.

Although their flagship, first beer, Keith’s Pale Ale has half the hops of today’s IPA standard (for you geeks, Keith’s has less than 20 IBU’s [international bittering units], while 40 to 100 are the norm). Keith’s claims that they follow tradition here. Yet those who remember tell me that it once tasted of something.

If you want something cheap, too drinkable, and somewhat forgettable, Keith’s works. You might even pretend you are drinking history. Their tour rivals Disney for ridiculousness. But if you remain diligent at their bar and with your glass, you can squeeze three full pints out of their youths.

We left the tour pleasantly buzzed. We wandered Halifax, almost forgetting how odd and expensive it was. For a moment, we felt the importance of this port and its early entrepreneurs.