A few weeks ago, Pietro Ratti of Renato Ratti in Barolo came to town. We set up a buyer lunch at Gino’s Restaurant, especially because Gino’s had older Ratti vintages to open.

We started with Ratti’s Barbera d’Asti 2013: sprightly, brambly-fruited and lightly spiced: $16, very good 4 of 5.  Then his rosy, pomegranate, silky, Nebbiolo Langhe 2012: $19, very good 4 of 5.  Next, 2012’s gold-labled Marcenasco Barolo pounced out of the glass with cherry liquor, rose, and tobacco, more intensity, body, and serious but forgiving tannins: outstanding 5 of 5. Then lunch proceeded simply and pleasantly. 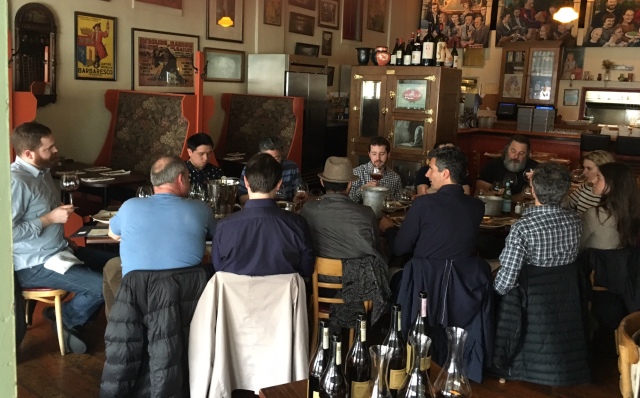 Soon, however, we got serious:

We pulled from Gino’s cellar two different 2008s and a 2006, decanting them an hour prior. But what might two different vineyards, merely a handful of miles from each other create?

2008 in Barolo was cool and wet, leading to delayed and staggered harvests through late October.  We’ll vet tiny, historic Conca against its southern neighbor, Rocche.

2008 Rocche: a 1.5 hectare vineyard that faces southwest, comprises of blue marl soil and sand. These typically drive elegance, depth, and persistence with roses and licorice. But let us see:

The PALATE is dry, notably bright. It feels soft with balsawood-like tannins. Alcohols feel warm like a sparking fire. The texture is mellow like a raw cotton.

Rich FLAVORS match the aromas: dark-fruited blackberry jam, tobacco, nutmeg, pepper, and iron-oxide lasting a medium plus length. It is outstanding (5 of 5) but will strut more in a few years.

The APPEARANCE looks a moderate garnet, but with a short clear rim and thick legs.

2008 Conca needs a decade for all that structure to loosen up. But it is also outstanding (5 of 5).

AROMAS and FLAVORS come at you open, heady, and all-consuming reminiscent of iron, tobacco, musk, black cherry, truffle, and lavender.

Drink 2006 Conca now. It has years ahead of it, but reads easy like an open book at present. It is outstanding (5 of 5). It sings with the savor of the lamb dish.

Pietro Ratti is a good man: kind, witty, and giving. He remains humble, respecting his father’s legacy. Yet, Pietro pushes his winery to focuss on purely fruit-driven Nebbiolo, eschewing blending with Barbera. His Langhe Nebbiolo and Barbera d’Asti provide easy, pleasant yet pure entries into his world. The Marcenasco is more complex and intense, but dances a line between approachability and ageability. But if you have the chance to give his single vineyard Barolo a decade, they will reward you.