It is called, Teroldego. And no, this is not a Tarintino sequel to Django Unchained. But it hardly sounds Italian nor does it roll off my Anglo-Saxon tongue.  Yet thanks to WWI and Woodrow Wilson, producers like today’s De Vescovi Ulzbach had to learn Italian.

Regardless, the Vescovi family has farmed this alpine bit since 1709, growing apples and grapes. They bottled briefly at last century’s turn but ended up had selling grapes to cooperatives thanks to a couple of world wars. Lucky for us, Giulio got a Viticulture and Enology degree at San Michele all’Adige and brought his estate vineyards back to life in 2003. Their 10 hectare estate only grows Teroldego.

The problem is that Teroldego grows like wild fire or teenagers.  Most wines come from the rich valley of Piana Rotaliana. But Vescovi’s vines grow on the soil-stripped hills above: straining vines to produce only their best fruit. 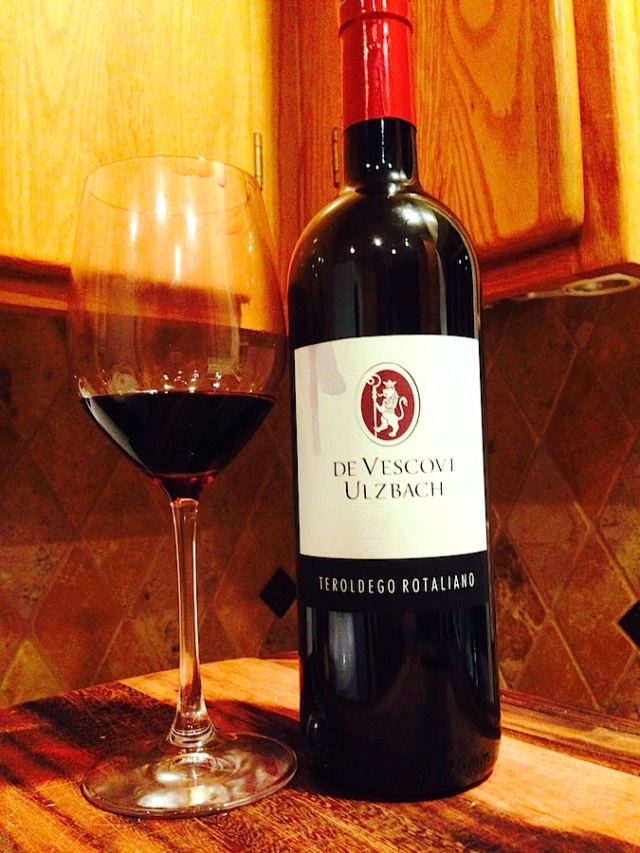 Aromas: Tero smells like Merlot-driven St-Emilion, Bordeaux from a warm year.  It has a medium plus intensity notes of ripe plum, blueberry, cassis, sprinkled with dried basil, vanilla powder, cocoa, and a black dried tobacco.

Palate: feels dry and austere up front, acidity feels medium and in place, medium tannins begin silken and turn grainy, alcohol feels warm but fine (13.5), the body is medium plus, the texture feels like fruit leather.

Flavors: taste akin to the aromas, but shift to something more serious. In addition to fruit, it tastes like the ripe skins of plum, cassis, and blueberry.  At least at first.  All that herb and tobacco dry things out.

De Vescovi Ulzbach’s Teroldego is a very good (4 of 5) wine with aspirations for greater things. At around $15 this is a great escape.

I wish there was less new oak action and modern methods. However, you could not mistake this for Napa Cab.  This wine dips its fingers in modernity but has its feet planted in the past. Now if only I could pronounce what’s on the label…