The final battle nears. Since late January, I have coerced grape juice into wine. Yet if I don’t begin bottling, it all risks ruin. Pumping oxygen out has carried my wine through weeks of racking. Now I must use the remaining two cleanser packs to purge thirty three bottles of their pasts. 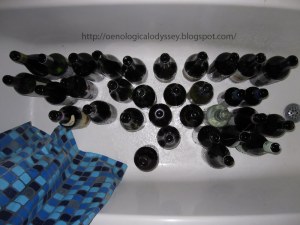 Drinking through the weeks left me with a few bottles. Work provided the rest. I rinsed and scrubbed each. Then my Trojan horse of Sodium Sulfate trumped any resisting bacteria. I re-rinsed everything three more times until the burning subsided. Tired and impatient, I brought in the fan.

Once somewhat dry, my siege-work of bottles were set for the final assault. I attached the bottling “Easy”-Siphon to the racking set, propped the carboy on a chair one last time, and, with help, began filling the bottles… 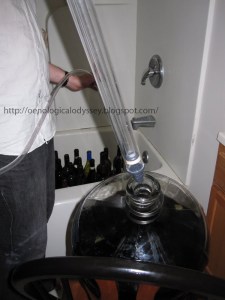 Messy. The siphon did not work with bottles that had curved punts (bases). Filling the other bottles went too quickly, so I had to manually top up to the necks (otherwise there would be excess air contact with the wine). My hands were bloodied and/or pink, the bathtub battlefield was stained by fallen victims, and tears strewn across my cheeks from the sodium sulfate.

Although only twenty-six bottles could fill, victory lay at hand, so I readied the corker.

Since I had sixty fresh corks from the separate juice and equipment kits, I used both in case one set was defective, thus hoping to save half of my surviving wine…unless both set failed… 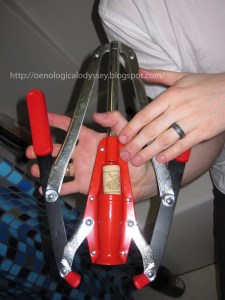 Before the cork squeezed into the neck (more or less), I pushed the last oxygen out with the Nitrogen blend. In antiquity, everything from olive oil to still fermenting CO2 kept their wine from spoiling. Today, most bottling is mechanized in temperature controlled environments, and bottles are wholly absent of oxygen. Me…well I might have cleaned the bathroom earlier.

With cruel irony, I put my pseudo-barbaresco into real bottles of Barbaresco (still no reply from the company as to the grape type[s], provenance, or vintage of the grape must). Like Patroclus in Achilles’ armor, my wine and I aimed at undue glories. 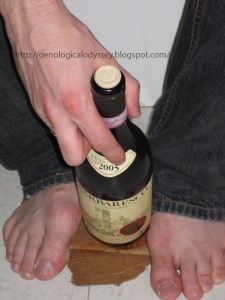 Rarely did the corks fit the differing bottles sizes (although screw-capped bottles seemed the most forgiving). The last task remained: foil capping. While wine is in storage, vermin love to nibble corks, so wax caps and later foil kept them at bay. Given my poor corking, an extra seal to keep wine off the carpet would not hurt…

http://www.youtube.com/get_player
Even if it could not hide the corks sticking out of the neck.

Now the bottles needed two days to stand and allow the corks to fully expand. I then took my completed twenty six and laid them rest, so that their corks might remain moist and the wine age.

A few nights later I uncorked a bottle at a friend’s pasta party. The wine’s levity and fruit went quickly and well, showing none of the blood, tears or kitty litter that went into it.

Thus, then, did they celebrate the wine of mine, tamer of Barbaresco.