We pick up last Monday’s EU Austerity Drinking Tour post south of Bordeaux, sick, but thirsty.  Our free, Open Doors, van tour of Graves had started decently.  Château Pont de Brion let us taste a mini-enprimeur of 2012’s just-harvested varietals.  They were tidy, well-branded, but too clean to be outstanding. Then I kicked a dog (accidentally), and they kicked us out.

Today, our van bounces to its next stop: Château la Croix:

The word Châteaux clearly gets applied to anything in Bordeaux.  A child plays with gravel in the driveway.  A stable-winery glares orange.  The center tree shades a large, black dog who greets with a lazy bark.

But superficiality be damned.  We came for wine, not glamor.  Our van clatters off, leaving us and three, twenty-something ladies in the parking lot.

Finally, a round Napoleon emerges. Mr. Espagnet takes us aside. No English? OK by us. Vineyard tour or winery tour?  Our three black-haired girls waver. They just want a drink.  But the rain holds off, so I ask for vines.  Mr. Espagnet nudges his black and neon-green glasses up his short stub nose, smirks, and off we go. 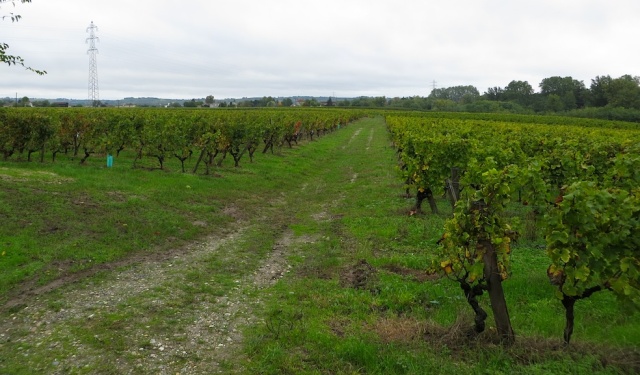 Blue-grey fuzz peppers these black orbs. Our guide pops one in his mouth. The girls squeak. He proclaims them nearly sweet enough for Sauternes: that most-golden of dessert wines. His earthen fingers squeeze another. It splits along a fuzzy seam, oozing a greenish gold.

Botrytis cyneria, a bacteria, is the culprit.  Known as “Noble Rot” when it attacks grapes after they’re ripe, bad “grey rot” when before.  The bacteria pierces grape skins, gradually desiccating them, concentrating sugars.

Graves’ rolling hills trap morning fog from its rivers. This damp, cool morning is perfect for growing the bacteria on grapes. Although rain threatens, usually afternoon sun dries and slows Botrytis from overdoing it.

Mr. Espagnet grows Sauvignon Blanc and Muscadelle to balance his dessert wine and also make whites.  For reds: the Cabernets, Merlot, a bit of Malbec, and a two hectares of Petite Verdot grow here.

He likes our poorly formed questions.  But the girls furrow their brows at our invasion. So we head inside his converted stable.

Barrels sit atop each other in the far corner, and opposite, a wall of more cement tanks for aging red wine. He uses all French oak, but has a few American barrels for kicks.

I then ask a question about fermentation.  Everyone in Graves uses laboratory cultured yeasts for consistency, Mr. Espagnet claims.  Egg whites and gravity are also de riguer for fining reds. Graves may be in the limelight of St. Emilion or the Medoc, but it follows what works.

Sober and thirsty, we go to the tasting stable.  A large table lines up bottles alongside paper plates of fois gras, mussels, and cured meat.  The challenge: find which vintage wins covering over a decade: 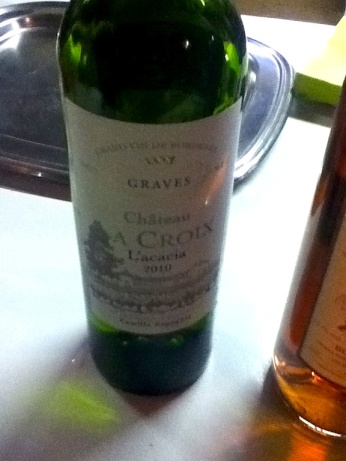 A white blend of Sémillon, Sauvignon, Muscdelle. Bright yellow colors lead to a panoply of young citrus and grapefruit aromas.  A tart, light body is punched up by flavors of grapefruit and sea salt, which sends us to the mussels.  This is sharp, characterful, medium plus length, and good (3 of 5).  A refreshing, lively aperitif, great with grilled fish or seafood

Extra golden colors lead to strong nose of candied fruit and vanilla. Bright acidity still tightens a round body.  Powerful minerals, pear, lime, mint, and soft vanilla fill the palate. We try the horrid-but-delicious fois grois.  It makes the wine lighter, citrusier, and more complex. The only lack is the length. Still, this is very good (4 of 5). Oddly, this has a decade ahead of it. And only 7.50 EU!

We start with 2001. Very exciting!  No color remains but a pale garnet.  A confident nose holds out with toasted vanilla bean, fall leaf, and cranberry.  Alive acids and balancing tannins head straight into bold flavors of fall leaf, cigar, and black fruit. But they are fading.  This is becoming a pure oak show, yet still vibrant. The length is medium. The quality remains good (3 of 5). For 8.10 EU buy it.

By the end, my wife and I are starving.  Rain pours outside. It is probably 2 pm. We devour half our baguette and avocado, while the girls dart angry, hungry glances.

Mr. Espagnet and his “Château” La Croix makes credible, real wine in Graves.  He charges nothing for them.  We start to realize that Bordeaux, at least here in Graves, can make real, daily wine for under $15.  Because we’re horridly sick, we buy his rosé and get ready for the van.

Check back next Monday. We continue our Open Door tour of Graves with Châteaux Caillivet.

4 Responses to Getting Dirty in Graves: Château la Croix