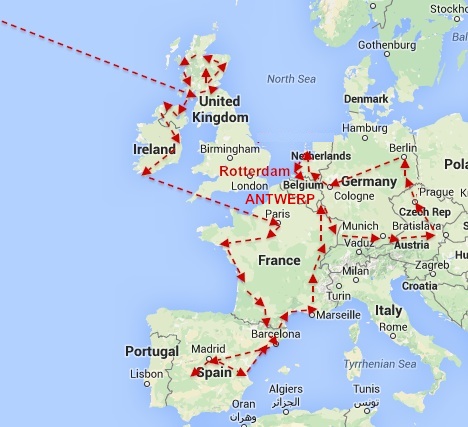 We loved Holland.  Yet Antwerp, this border town, decidedly looks south to Italy, France, and the extravagance of the Renaissance.  We stow our luggage in its monumental opera house…I mean train station:

Already in awe, we wander toward the city center. Restrooms are hard to find.  We start to get angry at Antwerp, at each other, at this whole stupid trip.  Then, near the river, we find the ancient Marketplace, strung with curing meat, smelling fantastic, and finally, a bathroom. 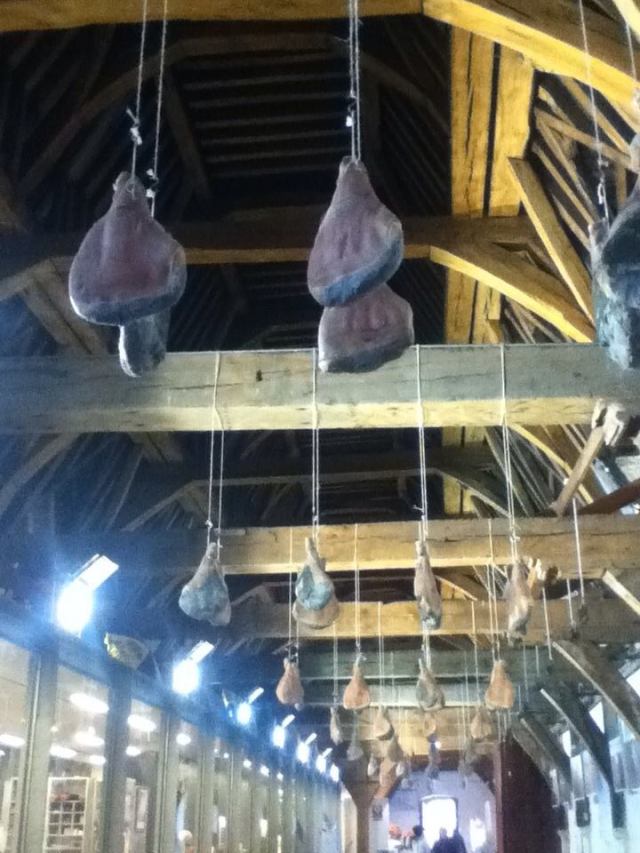 Winding streets take us to the waterfront and a medieval fortress known as “Het Steen”: stone castle. Built after the Vikings left, it once served as the city center. An 2nd century figure sits in a niche above the gate.

This is the phallic god Semini, which basically is a massive penis with arms, to whom women still come to and pray for children.

To cleanse our souls, we pop into the gothic, still unfinished, Cathedral of Our Lady. Its stonework impresses us, but the endless, intricate woodwork stands beyond belief:

The pulpit sprawls with Baroque details: vines, branches, birds from the world over, including an American turkey.

Christmas provides an added bonus, with all the massive altar pieces open and on display by Flemish master: Peter Paul Rubens

Inspired, we head to Rubens’ villa.  A unassuming door on a simple facade brings us into a cosy, almost cramped dining room:

Although every inch oozes with decorative detail and original works by Rubens.  Small but elaborate rooms feed us into his calm attempt at a Roman temple: 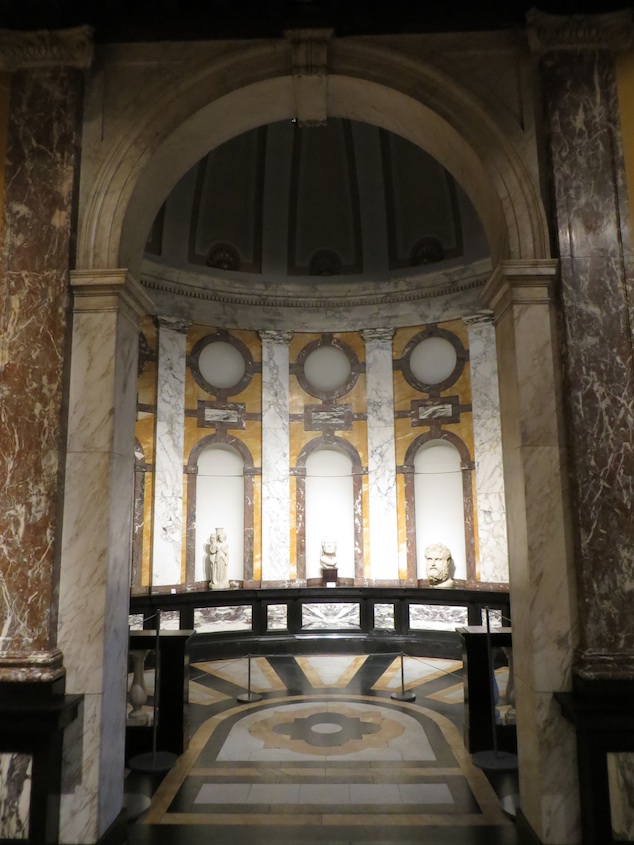 Then a narrow hall faces out into Ruben’s best attempt at an Italian Renaissance Courtyard, which he also painted.

After many dark, dinky rooms, Rubens studio opens up, brightened by huge windows and a two story high ceiling, pictured below from the outside.

Works by Rubens and his many students, including Anthony van Dyck, loom large throughout the studio space.  We can almost hear the near constant, busy, factory-like workshop churning out monumental paintings of well fed, pale people.

Happy and hungry, we wrap our Antwerp visit with a trip to Huisbrouwerij ‘T Parkhuis.  This brewery has the most impressive copper kettles we have seen since Scotland’s distilleries six months earlier on our trip. 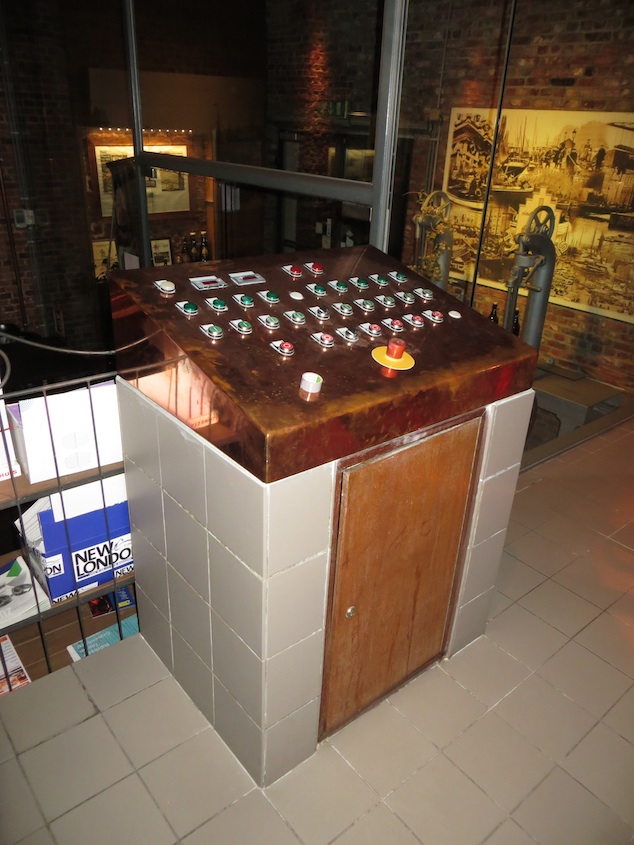 T Pakhuis is one of two breweries in Antwerp.  There used to be 27 but WWI and WWII along with the rise of macrobreweries slowly closed them down.  T Parkhuis never filters or pasteurizes their beer and only uses natural ingredients.  They even have a modern growler fill station.

But we came for beer. First up, their Blond:

APPEARANCE: looks a hazy but rich gold, with small fizz, and an off white head. AROMAS: smell of intense riesling and peach, lemon, and grassy hops. PALATE: fells dry, with twangy acidity, moderate bitterness, medium 4.9% alcohol, but fairly creamy in texture with a medium plus body. FLAVORS: taste similarly rich of riesling, lemongrass, arugula, hops, and a baking spice dusting that lasts a medium plus length. ‘T Parkhuis’ Blond is clean, refreshing but a bit straight: Good (3 of 5).

APPEARANCE: again looks hazy, but richly brown, with an off white head. AROMAS: smell again of grapes, but wild even somewhat musky. PALATE: feels dry, refreshingly zippy again, notably bitter, with alcohol around 6%, and a medium plus body.  FLAVORS: taste again of wild grapes, but with a more pleasant vanilla cream note, finishing slightly more seriously with salt and spice for a medium plus length. ‘T Parkhuis Bruin is unique and very good (4 of 5). 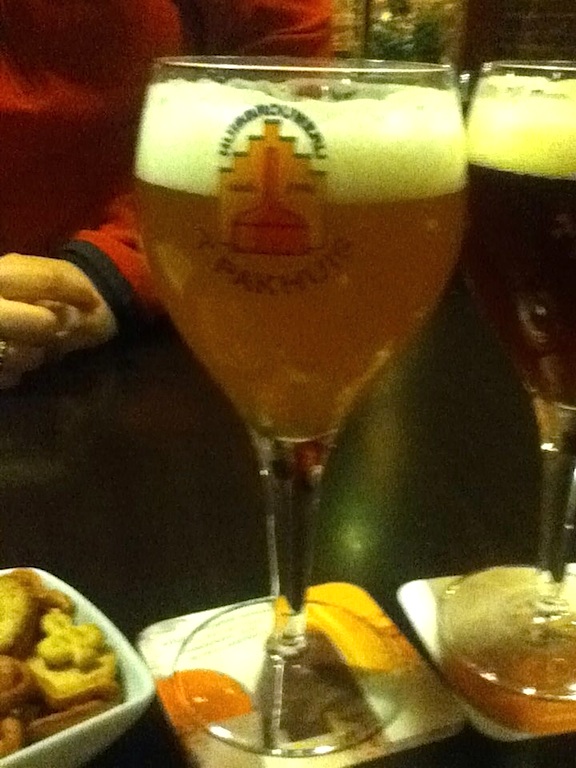 APPEARANCE: looks again a hazy, moderate gold color, with hidden fizz, and a white head. AROMAS: smell again of pronounced riesling peachiness, (an annoying Vapor Rub-aroma burns off), followed by banana and lime. PALATE: feels dry, tart, mildly bitter, with high alcohol around 8.5-9%, making for medium plus body. FLAVORS: pounce with riesling peach, banana, (a cough syrup burns off), grapefruit, honey, and evergreen sap from the hops. They last a long time. ‘T Parkhuis’s Blond Tripel is undeniably very good (4 of 5). Tasted blind, this is the most wine-like beer I have ever tried: more like a Gentil Riesling Gewürztraminer blend from Alsace than a beer.

But we save the best for last: Huisbrouwerij ‘T Parkhuis, Stout, Antwerp, Belgium. €3.50.

Catch us next Monday as we continue to explore Belgium’s breweries in search of the perfect drink.