Posted on September 6, 2017 by waywardwine

Think of Argentinian wine. If Malbec comes to mind followed by a shrug or shudder, I feel your pain. Argentina has tumbled down this monovariety’s path, much like Australia did with Shiraz decades ago.  Malbec became the recession’s answer to find a big red for less.  But it is a race to the bottom that backfires.  The grape, and Argentina by association, are now caged by their success.  They exist in most minds as a cheap alternative.

But what of Malbec’s parent from Bordeaux, Cabernet Franc?  Cab Franc hails from cooler climates thanks to its short season.  It makes for love/hate reds with acidity, leanness, complex aromatics, wild-berried fruits, and a tendency for green bell pepper. But how might it fare in the high, hot/cold, desert of Mendoza, Argentina?

Achaval Ferrer started in the mid 1990s. They planted cab franc as a blending grape for their Bordeaux blend, Quimera. But with the 2015 vintage, they decided the vines were ready for their own bottling.  Young winemaker Gustavo Rearte took the lead.

Achaval’s practices seem rare for Argentina, or anywhere. Cropping and sorting pars each vine down to only one bottle (usually a vine makes four bottles). They do not add sulfur. They avoid malolactic fermentation. They do not clarify, filter, add acid, or enzymes. They ferment hot.  Their Cabernet Franc sees only used oak.

But how is this first stab? 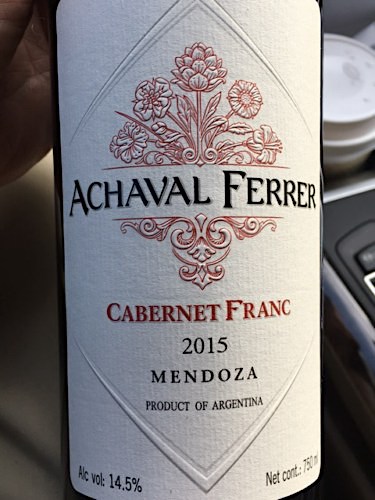 The dry PALATE ziplines with high-toned acidity and medium woody tannins. Fiery kindling of 14.5% alcohol heats every crevice of my mouth.  The body is mid-weight. The texture feels snappy and flinty.

FLAVORS carry the theme with thin slices of tart green apple peel that overlay a salad of plump plum, pickled beats, raspberries, and licorice that cary a medium plus length.

Achaval Ferrer’s Cab Franc crackles with energy.   It is very good (4 of 5) and under $20.  I credit both the lack of malolactic fermentation and new oak: both would have muddled it.  This wine thrives with food: from olives, lean meat dishes, and charcuterie, to hard cheeses and red sauce pastas.

This may make converts out of Cab Franc haters.  Big Malbec drinkers may want more but it will still intrigue them.  Achaval Ferrer has had a brilliant first crack at Cabernet Franc. I hope the rest of Argentina will listen.