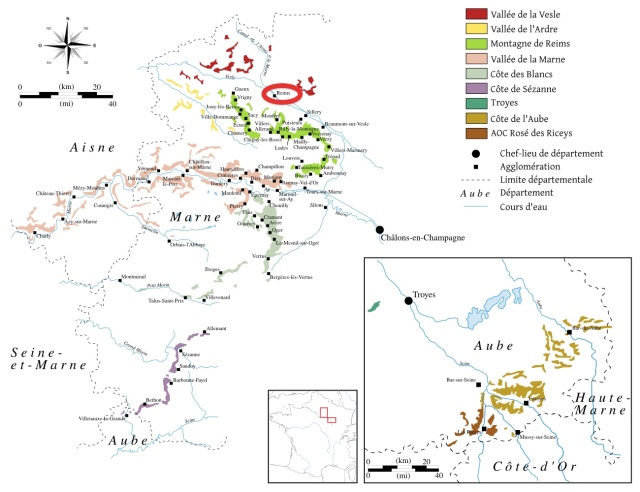 Today we leave the frozen tundra of Reims above for the subterranean caves that turn wine into fizzy, magical Champagne.

Our hosts recommended we reserve a tour of the caves of Taittinger: a producer we love. So we cross town, trudge uphill, and find the unassuming complex: 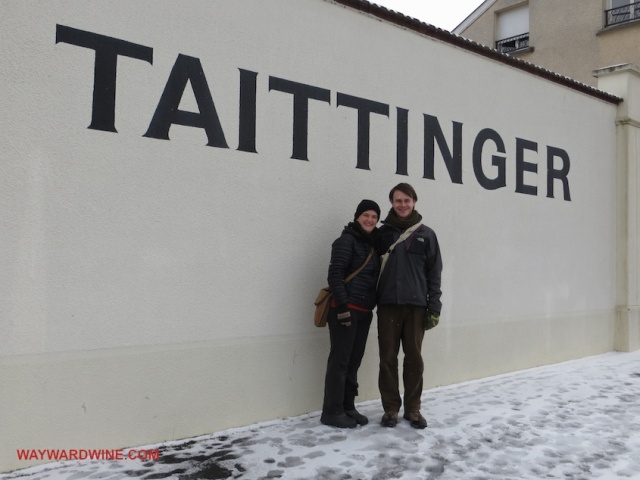 The waiting room looks chic, clean but lonely, baring an Australian couple and a fab model of Saint-Nicaise basilica that preceded the Champagne house (which the French Revolution flattened). 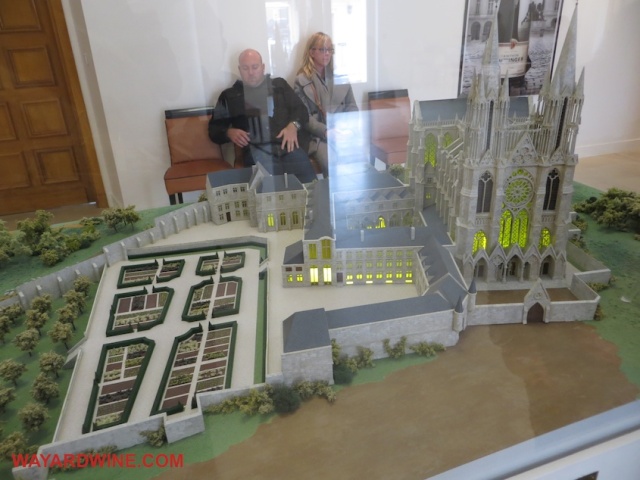 In no time, a finely dressed young lady collects us and sweeps down a creaky flight of stairs:

Taittinger is one of the last major Champagne houses still owned and run by its namesake family (let us ignore that brief stint of American ownership in 2005). But they are infants in Champagne.  These wine merchants took over 1734 bubbly house Fourneaux and moved into Champagne only between the world wars. They now own a huge 288 hectars of vines that comprise half of their production. Ever opportunists, after WWII they snapped up today’s abbey buildings and adjoining caves.  These caves make them special.

Only four other houses cellar their wine in Reims’ famed “Crayères”. The Romans cut the core of them as quarries to build urban monuments (see last post). But they created a labyrinthine cathedral in the process. 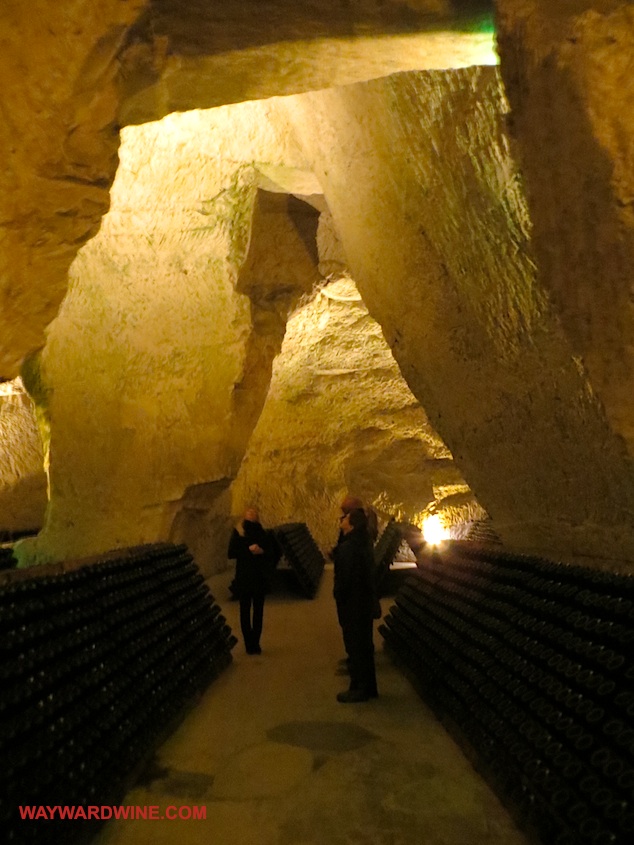 In later centuries, the caves wintered goods for St Nicaise Abbey and provided safety from shellings for locals and soldiers during WWI and II. Roman arches cross with medieval pointed gates, centuries old doors, and brickwork. Graffiti documents the span from Romans to the the modern age. 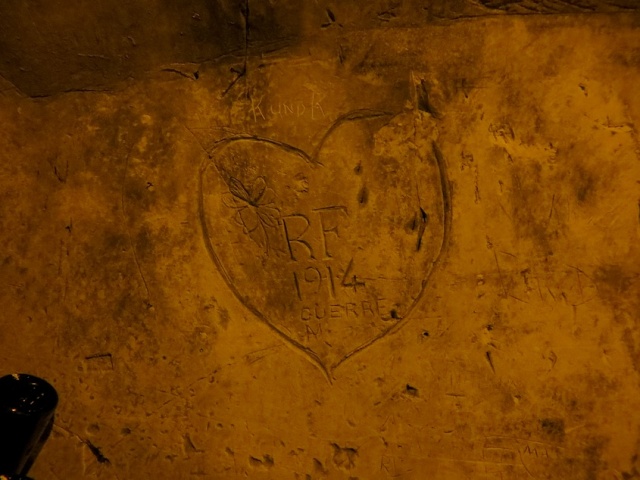 By the Eighteenth Century, monks realized the constant cool, dark, humid conditions provided the perfect home for turning still wine sparkling. Unlike Prosecco that referments a still wine in a tank to give it CO2, Champagne must secondary ferment and age in each bottle (usually magnums) for at least 1.5 years for non-vintage Brut and 3 for vintage Brut. 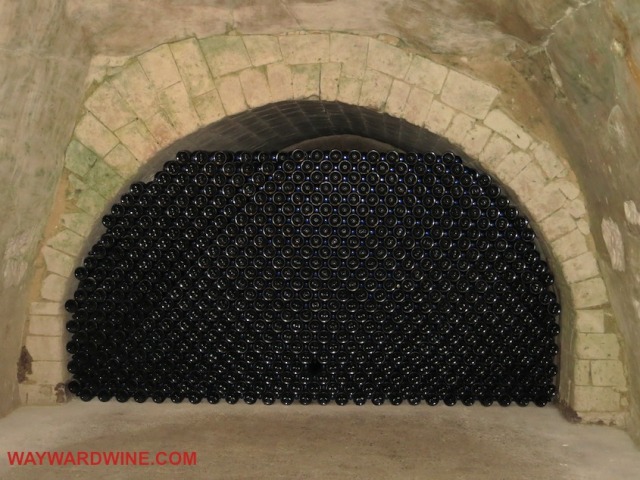 Arch after arch is filled with thousands of these bottles each. That time aging on the yeast lees gives Champagne its signature toasty, bready, autolytic notes. You can see that lees’ sludge streak below:

To separate now fizzy wine from that sludge, bottles tilt upwards on racks (below).

Riddlers (Remuers) deftly twist each bottle with agile wrists, slowly slipping the sludge into the neck. Then, bottle necks get frozen, the sludge-cicle pops out, a dosage of sugar, wine, etc tops off the bubbly’s balance, and a cork goes in.

Back up in the chic reception room, I spot something once ubiquitous but today rare in Champagne: a barrel room:

Our guide informs us that it is merely experimental. I wonder…

Anyway, this being an EU Austerity Drinking Tour, we opt for the complimentary tasting of Taittinger Brut Champagne NV 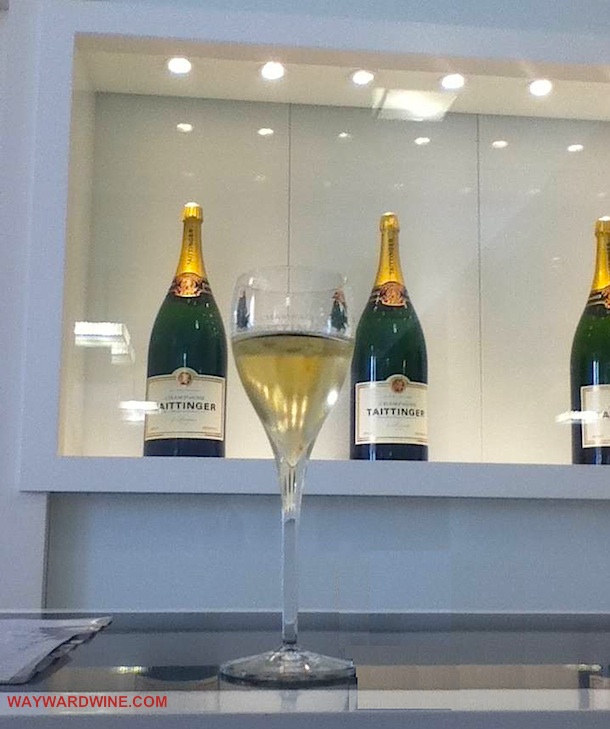 Served like wine in the latest of flutes, Taittinger’s house has sublime balance. Golden delicious apple, lemon peel, an chalk tango with slivers of almond on a warm croissant. Their NV is very good (4 of 5) as always. Paying around $50 for a bottle (which costs $14-$20 to produce) is a total treat.

We walk out to the cold courtyard and then wander south to find that other famed producer, Veuve Clicquot. Let us just say, the high fences and newer buildings lacked Taittinger’s romance: