Casual readers of Wayward Wine might realize my wife brews beer.  She did begin with wine.  When we both survived the WSET Advanced Exam, we decided to visit Europe’s great wine, beer, and spirit regions.  Betwixt those seven months and thirteen countries, Belgium happened.

So we drank 45 belgian bottles in 8 days…for research.  Like lightbulb, she realized beer could be as complex and age-worthy as any wine.

Upon moving back stateside and settling in Oregon, she took up home brewing and beer judging.  Soon, her beer awards and judging rank grew.  She started contributing reviews to Beer Connoisseur Magazine.  We even made a Saison with our butternut squash and fresh hops (read here).

Another Willamette Weekly Pro/Am was on the horizon. This beer competition pitted beers made by amateur home-brewers who collaborated with professionals. The trick is to stand out.

Tracy had ruminated on fusing beer and wine in new ways.  Some local brewers aged their beers in Bourbon or Pinot Noir barrels or turned to cheaper staves and chips.  However, most examples tasted brash, tannic, winey, boozy, or simply failed and were relabeled as sours.  Few risked fermenting in barrel for fear of infection.

One day I brought a special Pinot Gris from work.  It was Lange Estate Winery‘s Reserve Pinot Gris 2013.  We love Lange: a family-run, estate winery in Dundee Hills, Oregon.  Lange was the first to oak barrel ferment and age Pinot Gris in the New World.  Oaking melded mild layers of blanched almond and marzipan to Gris’ lemon, white flower and green pear delicacy.

Inspired, we drove to a local grocery and bought whatever Belgian beers that might mirror Lange’s subtlety.  At home we started blending them.  Piraat and Gris tasted terrible.  But the clean, dry, lightly fruity Belgian Golden Strong Ale by Duvel harmonized with the Pinot Gris.  Like Lange, Duvel invented the Golden Strong style.

Well, we reached out to Winemaker Jesse Lange for a barrel.  They had Pinot Noir barrels.  But too many other brewers had already repurposed red wine barrels. A pink Ale would look wrong.  The flavors would not sync.  But one day, Jesse found a Pinot Gris barrel ready for retirement.

We drove to Dundee with the help of Dylan and his girlfriend’s Xterra.  After miles climbing gravel roads, we saw Lange’s entrance.  Then a deer, fattened on pilfered grapes, stopped us.

It let us pass, as if sent by Diana, forest goddess, as omen of divine approval for our chosen path (or because it got hungry). We pulled up to Lange:

Once inside, Emily greeted us and Jesse came down and took us to the chosen one.

This barrel began as a tree in the Vosges Forest, France: barrel source of Alsace (aptly where Pinot Gris shines). Tonneliere (cooper) Doreau built it and gave it a medium toast.  New, it probably cost $1,000.  It has seen 12 seasons of Pinot Gris ferment and age at Lange.  2015 was its last hurrah. Then on June 13th Jesse emptied and sulfured it.

Tracy discussed her plans.  She asked how to purge the sulfur.  Boiling water should work.  Jesse asked about blending some wine to finish the beer.  But Tracy wanted to see what the barrel will add first.  We could stay all day, but the brewery calls us onward.

The barrel fits! Time to get it to Portland.

With slightly less finesse than Jesse, Tracy trundled the barrel into the brewhouse.

Tracy had requested to brew with Rogue Brewery’s pro Danny Conners at the Green Dragon in Portland.  Danny had created countless experimental beers for Rogue involving various fruits, herbs, and other additions.  He especially had experience barrel-aging beer with Rogue’s whiskey barrels.

Since the barrel was massive, two batches needed to be brewed on the one barrel pilot system.  She wanted the Pinot Gris to show, so she kept her Belgian Golden Strong Ale recipe simple with pale malt and traditional ingredients.

To keep the beer fresh and flavorful through barrel aging, they added four pounds of Saaz and Hallertau hops: quite a lot. 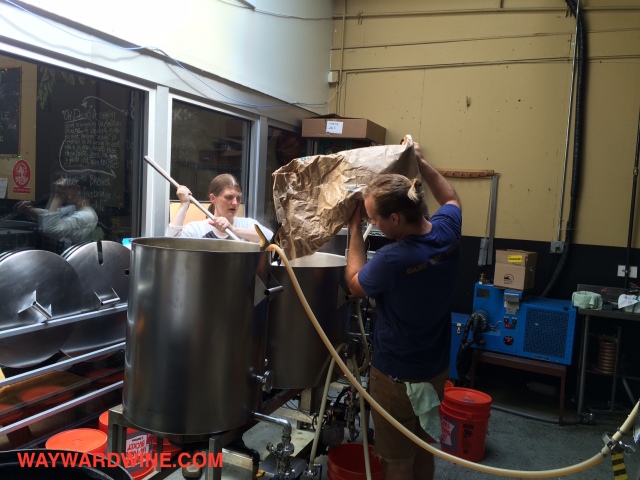 That long tube (above) transferred the finished wort (sugary beer-to-be) via the silver pump and chill plate to the barrel hiding behind the Solo Cups (below).

The beer was shifted to barrel after a mere eight hours of work: not shabby for 220 liters.

With yeast added, the slow fermentation began.  So the barrel won’t explode, the bucket (below) provided a CO2 blow off: 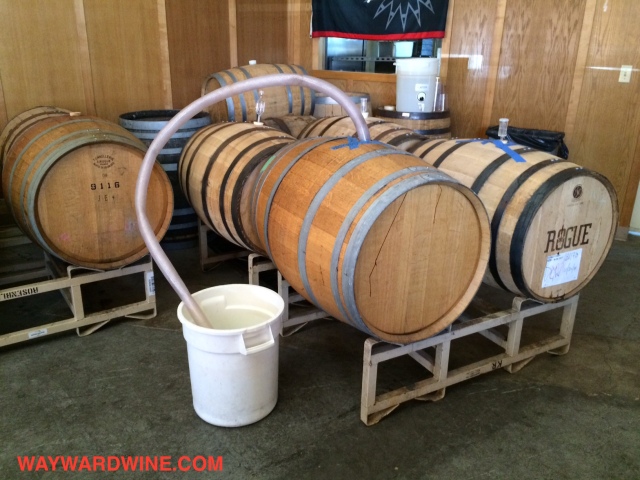 I snuck in a few weeks later to check on the ferment:

Early on it reeked of eggs. Worry ensued. But recently, the ale has smelled cleaner, with light Pinot Gris aromas, a golden hue, and subtle, well-integrated flavors of malt, fruity esters, and clean white wine.

Soon, Tracy will rack her beer into kegs, carbonate it, and bring it with Danny to pour at the Willamette Week Pro/Am.  If all goes well, her “Golden Oak” Belgian Golden Strong Ale will add a small part to Lange and Rogue’s local lore, becoming the first Northwest Golden Strong fermented and aged in a Pinot Gris barrel (probably).