We returned to Edinburgh’s BrewDog bar to taste something new: unhopped IPA. 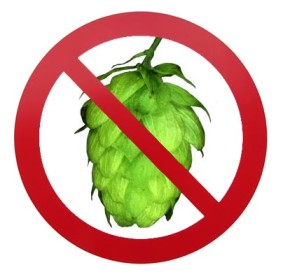 A few weeks ago we tried a bottle of BrewDog’s Punk IPA.  It tasted too pretty to be punk.  But its aromatics and herbaceous bitterness, like all IPAs, came from hops: leafy green flowers cut from vines and steeped before, during, or after fermentation (originally, to kill bacteria with acid).

Hopping has become fetish for craft brewers.  Like contestants from Rupaul’s Drag Race: ever-increasing hops have painted beers in pine foundation, wigged them in grapefruit, and dressed them in cut grass.  It has become a bit ridiculous.

Tasting competitions and beer dorks have driven double, triple, quadruple, and dry, or wet hoppings from a million vine strains.  But since Cascade hops have become the gold standard, all IPAs taste the same.  Too much of good thing became too much of a good thing.

This war of attrition finally led to a cold war standoff:…or dog off.

Flying Dog of Colorado and BrewDog of Aberdeen agreed to each brew Zero IBU (international bitterness units) IPAs.  Both sides had to use mint, bay leaves, rosemary, juniper berries, and elderflower.  Which beer mimicked hops best, but without hops, won. 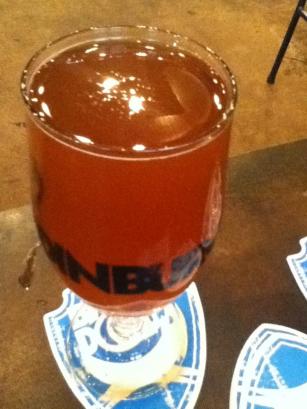 To start off, it looks hazy, like V8 with orange juice.  Dinky fizz scrolls up the glass and the head quickly falls flat.  Haziness and no head do not make it faulty.  It just looks rushed and unfiltered for no reason.

Flavors hold out for a quite long finish.  Flying Dog’ Non IBU IPA is a good quality beer and very fruity (3 out of 5).  But as an IPA, it lacks the florals or green, grassy edge.  The tannin is spot on, but the acidity is whipping.  The haziness is distracting.

BrewDog’s ZERO IBU IPA is on your right.

It looks clear and true, with medium plus intense amber copper color and a white fizz rim.

The palate tastes dry as a tree, with average acidity, extra bitterness, similar 7.5% alcohol, and a slightly fuller body.

Yet it tastes less pronounced, with average intensity flavors of menthol cigarets, Ricola cough drops, and very dark berry fruits.  BrewDog is much darker, with a richer froth.  The length lasts equally long as Flying Dog.  This is very good beer (4 out of 5) but odd.  It pulls off IPA’s looks, tannin, and pine and spice flavors, but lacks intensity and that tell-tale grassy and floral quality.

How could these beers taste so differently?  They both want to be IPAs.  So I scan my brain over all the IPAs I’ve drunk.

It hits me.  Both brewers, it turns out, unconsciously modeled their beers after two different styles of IPA.  There is no universal IPA (just as Plato’s ideal forms is b.s. philosophy) but many manifestations.

The US typically brews fruitier, sweeter IPAs thanks to our Cascade hops (and other strains), and less steeping time.  Meanwhile, UK IPAs tend to taste more like pine trees thanks to hardier varieties and longer extraction.  Both styles also serve the different demands of their nation’s food and drink trends.  So neither dogs’ fake IPA is wrong.

We ask the bar who won.

Flying Dog won three of five taste-offs throughout Scotland.  Sorry BrewDog, nationalism is blind, or at least won over by fruity, friendlier beer.

From left to right: Flying Dog and BrewDog’s fake IPAs, with BrewDog’s Hardcore IPA on the right.

It flays these sheep in faux-hopped clothing.

The color matches BrewDog’s Zero IBU with medium plus amber copper but more thin white lace.  Clearly this set their standard for their unhopped IPA and not their lighter, golden Punk IPA.

The palate tastes dry, with medium plus acidity, tannin, and a high 9.2% alcohol adding to a full body.

Hardcore lives up to its name, with mouth-lashing hops and extremely long length.  By now, my wearied senses tell me it feels brittle and bitter yet frothy and creamy.  BrewDog’s maximalist approach somehow balances itself into a harmony of intensities.  Like a rapid fire D beat drumming, thrashing hair, and metal.  Somewhere between Black Flag and Black Sabbath.  The quality ranks at outstanding (5 of 5).

Yes, Hardcore wears the hopped-up lipstick like so many IPAs before it.  Yet it manages to balance them with dark malt.  I may have a mouthful of pine needles, but richness and cream get me through.