What makes a vineyard special?  Names like la Tâche, Mesnil, To-Kalon, Beckstoffer, Richbourg, and Canubi get geeks swooning and burning their wallets.  But forget soil, weather, aspect, drainage, or anything physical. We usually prattle on about that stuff to justify taking out a second mortgage. No, human history and the arbiters of taste have made these sites more prized than their fancy dirt.

In Oregon, Shea vineyard in Yamhill-Carlton has a cult status. How did this happen?

Dundee and its rich, volcanic soil was all the rage in the 1980s. But the Shea family went West and planted in 1989 in Yamhill-Carlton. The soil is sedimentary over fractured sandstone: not Dundee. The site sits in a hilly pocket. It allows in fog but then gets hotter than others. This diurnal range would make for big Pinot. 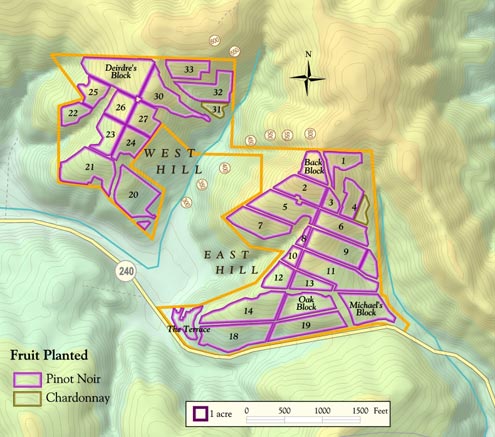 Just as Shea’s grapes came online in the 1990s, winemaker Ken Wright’s fame was rising. He highlighted Shea with his Panther Creek winery, but after a few years he went independent. Then, with the 1994 vintage, Robert Parker, in all his majesty, gave Wright’s own Shea a 92 and Panther Creek’s Shea a 94: his highest score for Oregon yet (it probably did not hurt that Parker’s brother in law owned the plot next-door).

Yet the original winner of this popularity contest remains Panther Creek.  But since Shea tends to be a Parker love-child of weight and intensity, let us go with a vintage that plays against type: 2011. Spring and Summer kept cool and wet, until a warm September brought in a healthy harvest. Thus, alcohols remained lower, acids higher, even for Shea.

The APPEARANCE looks clear, with a hazy iron rust rim that fades into a medium ruby core.

The PALATE feels dry, supple, yet medium plus acidity, mild tannins, and medium alcohol frame a medium body with a raw silk texture.

FLAVORS remain sparkling, bright, mineral, and spiced, with bright orange and cranberry. However, these elements get numbed by a swath of velvet oak. Medium plus length.

Back to our original question. What makes a vineyard special? With Shea, good timing mattered. Parker was making big wines the rage. Ken Wright’s fame was rising. Shea’s vines were old enough. Their vineyard management was good enough. Then the hot 1994 vintage delivered.

Such ripeness is atypical of Oregon. Even a lean 2011 cannot hide Shea’s powerful fruit.  But really the collision of celebrity in Parker and Wright and fickle fashion’s love of big, dry, reds vaulted Shea to iconic status.